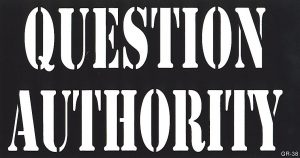 Remember those bumper stickers?  Question Authority.  The last time I saw one was on Telegraph Avenue in Berkeley – on one of those tables that folks set up to sell their wares.  It was the quintessential statement of identity for those who sold anarchy on the edge of UC-Berkeley.

This week’s sermon examines the matter of Jesus’ authority and how it was different from all other forms of authority in the world.  Read the texts for this devotional guide and give some thought to how authority works in your life as well as the person or persons to whom you grant real authority in your life.

The sermon is called “Real Authority.”

Monday, January 22.  Read Matthew 7:28-29.  1) What was so amazing to the crowds about Jesus?  2) What do you think made Jesus’ authority so distinguished from the scribes?

Tuesday, January 23.  Read Matthew 8:5-13.  1) What did a Roman officer want Jesus to do for him?  2) How did the officer feel about his worthiness in regard to Jesus coming to his home?  3) What did the officer say to Jesus about authority?

Wednesday, January 24.  Read Matthew 9:4-8.  1) Read verses 1-3.  Why were the scribes upset with Jesus?  2) How did Jesus view forgiving sins versus healing the paralyzed man?  3) Why was this, for Jesus, a matter of authority?

Dear Father.  Hallowed are you above all other authorities and powers in the Creation.  You have defeated sin and death, calmed the Sea, raised the dead, and exorcised demons.  There is no power that has authority over you.  In this moment of prayer, we pray that we will not forget your authority nor turn over to any other power the authority due only to you.  May we submit to you in ever aspect of our lives.  Forever submissive to you and your will.  In Jesus’ name, we pray this.  Amen.

Holy, Holy, Holy! All the saints adore Thee,
casting down their golden crowns around the glassy sea;
cherubim and seraphim falling down before Thee,
which wert and art and evermore shalt be.

Holy, Holy, Holy! though the darkness hide Thee,
though the eye made blind by sin Thy glory may not see,
only Thou art holy; there is none beside Thee,
perfect in pow’r, in love, and purity.

Can Words Have Authority?
Can anyone actually speak with real authority today?
by Russ Lawson

The esteemed editor of the Greenville Daily Advocate newspaper (and my friend) Bob Robinson, recently used a word in one of his articles that caught my attention. It caught my attention because we don’t hear it much any more. The word was “balderdash.”

I have always been intrigued by the background and meanings of words and phrases. I have several books on the subjects such as, “Pig’s on Ice”, “Heavens to Betsy,” and “Horsefeathers” by Charles Earle Funk, as well as more scholarly works such as lexicons and thesaurus. I have Greek study books, Hebrew study books as well as study books on several African languages. Again, I have an interest in words and their usage.

Now, checking into the background of the word “Balderdash,” I found the following record from the British writer, Michael Quinion. He writes, “We really don’t have a clear idea where it comes from. Some argue its origin lies in the Welsh “baldorddus”, “idle noisy talk or chatter” (though that is pronounced very differently), while others point to related words in Dutch, Icelandic and Norwegian, such as the Dutch “balderen”, which means “to roar or thunder.” It appears around the time of Shakespeare with the meaning of froth or frothy liquid, or a jumbled mixture of liquids, such as milk and beer, or beer and wine. Only in the latter part of the seventeenth century did it move towards its modern meaning, through the idea of “speech or writing that is a senseless jumble, hence nonsense or trash.”

Though all of this is interesting, what does it really have to do with anything? In application I was thinking about an incident from the life of Jesus:

A few days later, when Jesus again entered Capernaum, the people heard that he had come home. They gathered in such large numbers that there was no room left, not even outside the door, and he preached the word to them. Some men came, bringing to him a paralyzed man, carried by four of them. Since they could not get him to Jesus because of the crowd, they made an opening in the roof above Jesus by digging through it and then lowered the mat the man was lying on. When Jesus saw their faith, he said to the paralyzed man,

“Son, your sins are forgiven.”

Now some teachers of the law were sitting there, thinking to themselves, “Why does this fellow talk like that? He’s blaspheming! Who can forgive sins but God alone?”

Immediately Jesus knew in his spirit that this was what they were thinking in their hearts, and he said to them, “Why are you thinking these things? Which is easier: to say to this paralyzed man, ‘Your sins are forgiven,’ or to say, ‘Get up, take your mat and walk?’ But I want you to know that the Son of Man has authority on earth to forgive sins.” So he said to the man,

“I tell you, get up, take your mat and go home.” He got up, took his mat and walked out in full view of them all. This amazed everyone and they praised God, saying, “We have never seen anything like this!” (Mark 2:1-12 TNIV)

Is there a difference is the meaning of words?

In this case, there sure was. The one speaking to them had authority! Jesus even emphasizes this point, himself:

Immediately Jesus knew in his spirit that this was what they were thinking in their hearts, and he said to them, “Why are you thinking these things? Which is easier: to say to this paralyzed man, ‘Your sins are forgiven,’ or to say, ‘Get up, take your mat and walk?’ But I want you to know that the Son of Man has authority on earth to forgive sins.” So he said … (Mark 2:8-9)

When the Master of the Universe speaks, it changes everything! Our own wants and desires are secondary and come in far behind the words of the Master in importance. So when Jesus’ last words are the following, we’d better pay attention:

Then Jesus came to them and said, “All authority in heaven and on earth has been given to me. Therefore go and make disciples of all nations, baptizing them in the name of the Father and of the Son and of the Holy Spirit, and teaching them to obey everything I have commanded you. And surely I am with you always, to the very end of the age.” (Matthew 28:18-20)

Some folks want to take umbrage with these words and tend to dismiss parts of what Jesus said here as being nonsense, balderdash or of less importance. Others don’t even think someone can speak to them with authority about anything.

Jesus, however, spoke these words with intention and claimed authority as he said them so we would live by them. They are anything but “balderdash” for us! They are meant to change lives. They were chosen so that we might know that the Son of Man has authority on earth … to both forgive sins and also commission us to continue the work of God!

There is no balderdash here!