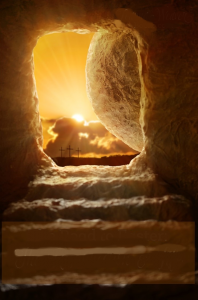 This week’s devotional prepares the reader for Easter Sunday with its commemoration of the death and resurrection of our Lord.

Tuesday, March 27, 2018.  Mark 10:32-34.  1) On the way to Jerusalem, what emotions were the disciples experiencing?  2) What did Jesus say to the disciples about what was about to happen to him?  3) How much do you think the disciples comprehended of this?

Friday, March 30.  Read 1 Corinthians 15:3-9.  1) What do you think Paul was trying to do in this text?  2) To whom did Jesus first appear, according to Paul?  3) What changes (and why) did Peter undergo during his contacts with Jesus?

Dear Father, Creator of the world and our Redeemer.  You have loved us thoroughly and persistently, never turning us over to the powers of darkness, in spite of our rebellion and disobedience.  You have pursued us through time even when it led to the cross and the giving of your Son, Jesus.  Please help us to think deeply this Easter about the Cross as the instrument of your love for us – its vivid message emblazoned on our hearts.  In Jesus’ name we pray this.  Amen.

Hymn for the Week:

Christ the Lord is Risen Today
by Charles Wesley, 1739

4 Soar we now where Christ has led, Alleluia!
Following our exalted Head, Alleluia!
Made like him, like him we rise, Alleluia!
Ours the cross, the grave, the skies, Alleluia!

Devotional Article of the Week

Resurrection Sunday!
Have you read the biblical story lately?

The following is a harmonization of the resurrection stories from Matthew, Mark, Luke, and John.

The next day after the Sabbath day (Mark 16:1), suddenly an angel of the Lord came from the sky, and there was a huge earthquake. The angel went to the tomb and rolled the stone away from the entrance. Then he sat on top of the stone. The angel was shining as bright as lightning. His clothes were as white as snow. The soldiers guarding the tomb were very afraid of the angel. They shook with fear and then became like dead men (Matthew 28:2-4).

Mary Magdalene, Salome, and Mary the mother of James bought some sweet-smelling spices to put on Jesus’ body. Very early on that day, the first day of the week, the women were going to the tomb. It was very early after sunrise. The women said to each other, “There is a large stone covering the entrance of the tomb. Who will move the stone for us?” Then the women looked and saw that the stone was moved. The stone was very large, but it was moved away from the entrance (Mark 16:1-4).

They went in, but they did not find the body of the Lord Jesus. They did not understand this. While they were wondering about it, two men in shining clothes stood beside them. The women were very afraid. They bowed down with their faces to the ground (Luke 24:3-5). But the man said, “Don’t be afraid. You are looking for Jesus from Nazareth, the one who was killed on a cross” (Mark 16:6).

The men said to them, “Why are you looking for a living person here? This is a place for dead people (Luke 24:5). He has risen from death! He is not here. Look, here is the place they put him when he was dead (Mark 16:6). Jesus is not here. He has risen from death. Do you remember what he said in Galilee? He said the Son of Man must be handed over to the control of sinful men, be killed on a cross, and rise from death on the third day (Luke 24:6-7).

“Now go and tell his followers. And be sure to tell Peter. Tell them, ‘Jesus is going into Galilee and will be there before you come. You will see him there, as he told you before'” (Mark 16:7).

Then the women remembered what Jesus had said (Luke 24:8).

So the women left the tomb quickly. They were afraid, but they were also very happy. They ran to tell his followers what happened (Matthew 28:8). These women were Mary Magdalene, Joanna, Mary, the mother of James, and some others. They told the apostles everything that happened. But the apostles did not believe what they said. It sounded like nonsense (Luke 24:10-12).

When Simon Peter finally reached the tomb, he went in and saw the pieces of linen lying there. He also saw the cloth that had been around Jesus’ head. It was folded up and laid in a different place from the pieces of linen. Then the other follower went in—the one who had reached the tomb first. He saw what had happened and believed. (These followers did not yet understand from the Scriptures that Jesus must rise from death.) Then the followers went back home.

Mary answered, “They took away the body of my Lord, and I don’t know where they put him.” When Mary said this, she turned around and saw Jesus standing there. But she did not know that it was Jesus. He asked her, “Woman, why are you crying? Who are you looking for?”

She thought that this was the man who takes care of the garden. So she said to him, “Did you take him away, sir? Tell me where you put him. I will go and get him.”

She turned toward him and said in Aramaic, “Rabboni.” (This means “Teacher.”)

Mary Magdalene went to the followers and told them, “I saw the Lord!” And she told them what he had said to her (John 20:3-18).

Suddenly, Jesus was there in front of them. He said, “Hello!” The women went to him and, holding on to his feet, worshiped him. Then Jesus said to them, “Don’t be afraid. Go tell my followers to go to Galilee. They will see me there.”

The women went to tell the followers. At the same time, some of the soldiers who were guarding the tomb went into the city. They went to tell the leading priests everything that happened. Then the priests met with the older Jewish leaders and made a plan. They paid the soldiers a lot of money and said to them, “Tell the people that Jesus’ followers came during the night and stole the body while you were sleeping. If the governor hears about this, we will talk to him and keep you out of trouble.” So the soldiers kept the money and obeyed the priests. And that story is still spread among the Jews even today (Matthew 28:9-15).

That same day two of Jesus’ followers were going to a town named Emmaus. It is about seven miles from Jerusalem. They were talking about everything that had happened. While they were talking, discussing these things, Jesus himself came near and walked with them. (But the two men were not allowed to recognize Jesus.) He asked them, “What’s this I hear you discussing with each other as you walk?” The two men stopped, their faces looking very sad. The one named Cleopas said, “You must be the only person in Jerusalem who doesn’t know what has just happened there.”

Jesus said, “What are you talking about?”

He is not here, he is risen just as he said!
They said, “It’s about Jesus, the one from Nazareth. To God and to all the people he was a great prophet. He said and did many powerful things. But our leaders and the leading priests handed him over to be judged and killed. They nailed him to a cross. We were hoping that he would be the one to free Israel. But then all this happened.

“And now something else: It has been three days since he was killed, but today some of our women told us an amazing thing. Early this morning they went to the tomb where the body of Jesus was laid. But they did not find his body there. They came and told us they had seen some angels in a vision. The angels told them Jesus was alive! So some of our group went to the tomb too. It was just like the women said. They saw the tomb, but they did not see Jesus.”

Then Jesus said to the two men, “You are foolish and slow to realize what is true. You should believe everything the prophets said. The prophets said the Messiah must suffer these things before he begins his time of glory.” Then he began to explain everything that had been written about himself in the Scriptures. He started with the books of Moses and then he talked about what the prophets had said about him.

They came near the town of Emmaus, and Jesus acted as if he did not plan to stop there. But they wanted him to stay. They begged him, “Stay with us. It’s almost night. There’s hardly any daylight left.” So he went in to stay with them.

Joining them at the supper table, Jesus took some bread and gave thanks. Then he broke some off and gave it to them. Just then the men were allowed to recognize him. But when they saw who he was, he disappeared. They said to each other, “When he talked to us on the road, it felt like a fire burning in us. How exciting it was when he explained to us the true meaning of the Scriptures!”

So the two men got up then and went back to Jerusalem. There they found the followers of Jesus meeting together. The eleven apostles and the people with them said, “The Lord really has risen from death! He appeared to Simon.”

Then the two men told what had happened on the road. They talked about how they recognized Jesus when he shared the bread with them (Luke 24:13-35).