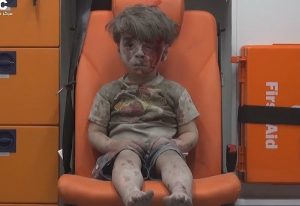 from the expensive vineyards you’ve planted.
I know precisely the extent of your violations,
the enormity of your sins. Appalling!
You bully right-living people,
taking bribes right and left and kicking the poor when they’re down.

13 Justice is a lost cause. Evil is epidemic.
Decent people throw up their hands.
Protest and rebuke are useless,
a waste of breath.

Finding the right text to attach to this meditation is hard only because there are so many available.  God had a lot to say in condemnation of people who only care about themselves.

In the photo is pictured Omran Daqneesh, a little Syrian boy with the soot and blood coating him as a result of Russian and Syrian bombing.  It takes your breath away knowing that little children like Omran are suffering because rich and powerful people do not want his people to share in the life and prosperity they enjoy.  Similar to Omran’s picture is the photo of Aylan Kurdi lying dead in the surf of a Lebanese beach after an attempt of his family to flee Syria to the north.  There are many, many more such stories of disappointment and death.

It would be impossible to save every child, every victim of abuse or human trafficking.  But there are some things that are possible and only made impossible by indifference or apathy.  These things include:  writing letters to people in power (lots of letters) and giving generously to causes that are making a difference in areas of the world where such suffering occurs like Doctors without Borders or Heifer International.  This website lists 50 non-profits that are making a huge difference in the world.

The point of this meditation is to say, “Don’t be a calloused American.”  It’s so easy to forget that there is a world full of people who are barely holding on to life.  Sesame Street is doing work in refugee camps where people live to escape violence in their own countries (such as Syria).  Sesame Street has taken its puppets to these camps to teach and encourage the children without much hope or stimulation.  These projects show what happens when people pay attention to what is going on in the world.

TED Talks has a short video about what the world would look like if it was reduced to 100 people.  It is a very sobering look at the human challenges facing our globe.  Check it out.

Feeling poor?  Want to know where you stand in comparison to the rest of the world?  Check out this How Rich Am I? website.  It’s a quick and easy way to get a reality check.  Walter Brueggemann wrote a comprehensive look at what the Bible says about wealth in his book Money and Possessions.  Starting at Genesis and going through Revelation, there’s nothing more to be said than that God has a lot to say about how we use wealth.  With wealth comes responsibility.  Imagine what would happen if Christian people and their churches marshaled their considerable resources to help ease the suffering in the world!

A Christian should feel in her/his gut the impact of Omran and Aylan.  We are fellow citizens with them on this planet.  Do what you can.

Father of generosity, who gave this beautiful world to us and placed within us the possibility of enormous good.  We confess that we have not treated your generosity with the respect and honor we should have.  We have warred, polluted, and run roughshod over both the planet and its people.  May we live in awareness of the considerable need that exists all around us and do what we can locally or globally to make a good difference.  Paul said the earth groans.  Help us to hear it.  In Jesus’ name I pray this.  Amen.