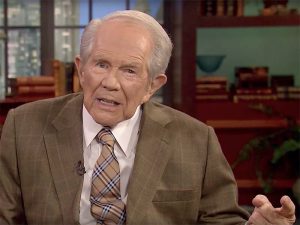 You have been warned, Pat Robertson!
By Richard Mouw

(RNS) — It didn’t take long for some preachers to start telling us why God caused the horrible mass murder in Las Vegas to happen. Pat Robertson led the way, declaring that it was divine retribution for the widespread “disrespect” for Donald Trump in America.

The best response to such bad theology came from a bus driver I met several years ago in New Orleans.

I was there with my wife for an academic convention and decided one afternoon to take a tour of the city. It was a year after Hurricane Katrina, and in his insightful running commentary, the driver offered some personal memories of what folks in New Orleans had experienced in that disaster.

The driver told us that he grew up in the Seventh Ward — which holds the largest African-American Catholic parish in the country. He had received a Catholic education at a school run by nuns, and as we passed his home in the neighborhood, he commented that his mentors had done a fine job. We stopped at a blocklong grassy area.

“To you folks that is just a large field,” he said over the speaker system. “But for me it is where the Motherhouse of the Sisters of Saint Joseph stood until the hurricane destroyed it. The wonderful community of nuns who taught me lived there, but now they have had to disperse.”

The driver then went on to make his theological point.

In the wake of the disaster, he and his family had spent some time in Texas. “It was the Bible Belt,” he noted, “and I’ve got tell to you about something disgusting that I heard there.” A local preacher had gotten some publicity, he said, for proclaiming that the destruction caused by Katrina was a judgment from the Lord on New Orleans because of the city’s many sins.

“I get angry about that comment every time I pass this spot,” our guide said with obvious emotion. “The fact is that there was no damage done to the French Quarter — Larry Flynt’s Hustler Club is still doing business as usual. But the Sisters of Saint Joseph lost their motherhouse. What kind of divine judgment is that?”

The driver knew when preachers moved into bad theological territory. There are many warnings in the Christian tradition about the dangers of claiming to know God’s specific purposes in human events.

Here is one I read recently, in a Protestant document from the 17th century: We finite creatures ought to refrain from “inquisitive searching into the hidden and deep things of God.”

Those of us who believe in the Last Judgment know that we may learn a little more about God’s purposes in history when that day comes. In the meantime, we had better be clear about the warning that came from Jesus himself:

“I tell you, on the day of judgment you will have to give an account for every careless word you utter” (Matt. 12: 36).

You have been warned, Pat Robertson!