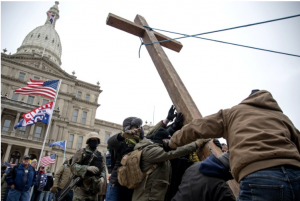 Op-Ed: The ferocious last gasps of the religion of Christian America
by RICHARD T. HUGHES, Ph.D.

Donald Trump’s presidency has baffled the majority of Americans for four years. What should we make of decisive Christian support for an American politician whose life and priorities are fundamentally anti-Christian? Why would elected members of any party support legal maneuvers that would undermine American democracy? How could insurrection against the people’s government be configured as patriotism?

As Trump’s reign implodes, these anomalies betray the last gasps of a long-standing American religion that is now passing away — the religion of Christian America sustained by a corrupted version of Christianity.

If faith can inspire extremism, a dying belief system can inspire unthinkable deeds, even unthinkable acts of violence, as its adherents attempt to preserve its power — in this case, in the American public square.

To be clear, this dying American religion has little or nothing to do with Jesus, who consistently lifted up oppressed and marginalized people — women, the poor and ethnic minorities, for example — but everything to do with white, patriarchal dominance. And as it dies, it opens up space for new voices that have been marginalized for many years, and there we find fresh hope.

In order to grasp the effect of Christian America on our current crisis, we must look back 500 years to a young Protestant pastor who erected a theological foundation that, in due time, would help sustain a nation the pastor could never have imagined — the United States.

The pastor focused his work on a single city and sought to transform it into a model kingdom of God, a city where God would rule over the church but also over politics, art, music and every other aspect of human life.

The pastor was John Calvin, his city was Geneva, Switzerland, and his work inspired the Puritans who settled New England, the Presbyterians who dominated the Middle Colonies, and the Baptists who would dominate the American South.

By 1776, when the American nation was born, Calvin’s vision of a social order ruled by his concept of the Christian God informed the majority of the faithful throughout most of the 13 colonies.

The Founders, though some were Christian, had a radically different vision for the nation — a vision of liberty and human equality grounded not in the Christian religion or fealty to biblical text but rather in “Nature and Nature’s God,” as Thomas Jefferson put it in the Declaration of Independence. The Constitution’s 1st Amendment went even further, stripping the Christian religion — or any religion, for that matter — from exercising a favored status under the law.

Calvin’s and the Founders’ ideals were clearly at odds , though they have coexisted, often with considerable unease, for most of the nation’s history.

Calvinism, as it has played out in the U.S., explicitly stands for Christian dominance but also implicitly promotes two other forms of cultural and political power — whiteness and patriarchy. Virtually every other form of Christianity that emerged from Western Europe and took root in the United States did the same, and by the 1950s, most Americans understood that the ideal of Christian America meant Protestant dominance, white dominance, male dominance and heterosexual dominance. There was little quarter given anyone who seriously questioned these boundaries.

Then came the 1960s, when the Founders’ promise of liberty and equality for all began to bear new and — if measured in Calvin’s terms — altogether radical fruit. People of color, women, gays, lesbians and nonconforming people of every sort found in the revolution of the 1960s a legitimacy they had not known before. Emboldened, they began to claim their rightful place in America’s public square.

By the late 1970s, Christians chiefly committed to white and patriarchal power launched a counterrevolution that played itself out in U.S. churches and communities, winning over fundamentalists and evangelicals in particular. Intent on controlling the nation’s halls of power, their efforts sailed under the banner of saving Christian America.

A little more than a generation later, when voters chose the nation’s first Black president, it was clear that the counterrevolution was failing. “All men are created equal” had pushed Calvin’s legacy to the wings of the American stage.

Philosopher-theologian Paul Tillich once defined religion as one’s ultimate concern precisely because it deals with questions of meaning, life and death. That definition is helpful as we seek to understand the role of Christian America in the crises of our time.

The ultimate concern of millions who consciously or unconsciously follow the lead of Christian America focuses squarely on preserving the privilege and power that their earlier dominance had afforded them. They are determined to block women, people of color, immigrants, gays, transgender people and others marginalized for most of American history from attaining the status they think is reserved for them.

Because their privilege and power define for them the meaning of life, and because they regard the loss of power and privilege as a living death, their devotion to status is not merely political. It is also deeply religious. And that is why Christian America advocates have so often claimed that God Almighty anointed Donald Trump as president of the United States.

We will, therefore, see more assaults — perhaps even more violent assaults — on the Constitution and the government established by America’s Founders. And those who launch those assaults will inevitably ground them in the venerable tradition of Christian America that is dying before our eyes.

Richard T. Hughes is a professor emeritus of religion at Pepperdine University and the author of “Christian America and the Kingdom of God” and “Myths America Lives By: White Supremacy and the Stories That Give Us Meaning.”