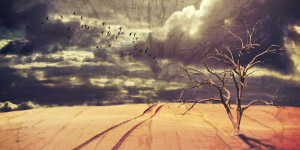 Tuesday. Read Isaiah 13:6-9. 1) What does Isaiah tell Judah to do in light of the approach of the day of the Lord? 2) Why do you think he gave them that advice? 3) What will the “day of the Lord” be like for them?

Wednesday. Read Amos 5:18-20. 1) Why do you think people may have desired the “day of the Lord” in light of the fact that Isaiah warns them against this? 2) What does Isaiah say about the probability of escaping the day of the Lord?

Thursday. Read Luke 3:3-9. 1) What did John the Baptist say to the people who wanted to be baptized by him? 2) What do you think they were saying when they said, “We have Abraham as our Father?”

God of the rebellious and willful. We are often like the people to whom Joel wrote his prophecy, going our own way, ignoring your guidance for us. Please help us to repent when we have sinned, return to you when we have gone to far, and restore our lives of devotional to your ways. Please forgive us. In Jesus’ name we pray this. Amen.

Love for All
by Samuel Longfellow, 1864

Love for all! and can it be?
Can I hope it is for me—
I, who strayed so long ago;
Strayed so far, and fell so low?

I, the disobedient child,
Wayward, passionate and wild;
I, who left my Father’s home,
In forbidden ways to roam;

To my Father can I go?
At his feet myself I’ll throw;
In his house there yet may be
Place—a servant’s place—for me.

See! my Father waiting stands;
See! he reaches out his hands:
God is love; I know, I see,
Love for me—yes, even me.

Face the Mirror and Face the Music
You mean he means me?
by Patrick D. Odum

[John said,] “Produce fruit in keeping with repentance. And do not begin to say to yourselves, ‘We have Abraham as our father.’ For I tell you that out of these stones God can raise up children for Abraham. The ax is already at the root of the trees, and every tree that does not produce good fruit will be cut down and thrown into the fire.”

“What should we do then?” the crowd asked.

John answered, “Anyone who has two shirts should share with the one who has none, and anyone who has food should do the same” (Luke 3:8-11 TNIV).

Ever had one of those days that just seemed to go from bad to worse? Some folks in Kane County, Illinois, had a Wednesday in September that was a day like that.

Truth be told, though, their bad days were largely of their own making.

It started out as a day in traffic court for ten people who had been previously identified as having suspended or revoked licenses. They had company when they left the courthouse after their appearances — undercover police officers followed them to the parking lot and signaled other officers in unmarked cars. When these ten folks got into their cars and drove — drove — away from the courthouse, the police pulled them over, wrote them tickets, and had their vehicles towed.

Some of the red-handed complained. One guy said his sister was supposed to drive him to court, but hadn’t shown up. “If I didn’t appear, there’d be a warrant out for my arrest. I’m in trouble either way.” Poor guy. When pressed, though, he did have to admit that he hadn’t possessed a valid driver’s license in 27 years.

Really, though, what do you say in a situation like that, watching your car being towed away and knowing you really have no defense? It’s not like these drivers didn’t know they were breaking the law. They had just gotten away with it long enough that they got comfortable. Complacent. It probably never occurred to them that they might get busted.

That’s the path of least resistance, to not give your habits and choices much thought until the consequences turn and take a bite out of you like a mongrel dog you’ve grown accustomed to scratching between the ears.

It’s the path of least resistance, which I guess explains why a husband doesn’t give his temper much thought until his wife takes the kids and leaves. Or why the stories and confidences you pass on regularly don’t seem like such a big deal until you’re face to face with a friend who’s angry and hurt. It’s why we can convince ourselves that an online “friendship” is no big deal — until a marriage implodes. It’s why we can throw our weight and attitude belligerently around a church and never really see ourselves until someone holds up a mirror and makes us look. Recovering addicts talk about needing to hit rock bottom before they decided to get some help, but rock bottom isn’t just for alcoholics, drug, or sexual addicts.

God asks us, though, to not let things get that far out of hand. That’s what repentance is about.

Repentance isn’t for God so we can let him know that we’re really sorry for our sins. He knows how sorry we really are — or really aren’t. And it isn’t to pay for our sins, to somehow right the balances. He did that for us, in Jesus. And besides, we couldn’t do it even if he asked us to. Repentance isn’t for God at all, actually.Repentance is for us. God knows our tendency to take the path of least resistance and not spend very much time at all in honest appraisal of our behavior, thoughts, values, and priorities. In asking us to repent, he asks us to look in the mirror to see if who we really are is anything at all like what we imagine ourselves to be.

“We’re children of Abraham,” said the religious people proudly in John the Baptist’s day. John dared to suggest that God wasn’t all that impressed with their professed pedigree. “God can find children of Abraham under any old rock,” he sniffed at them. “Produce fruit in keeping with repentance.”

Repentance is the place where we bring our walk in line with our talk. To be the “children of Abraham” that they imagined themselves to be, John said that the haves needed to share with the have-nots. The tax collectors needed to stop enriching themselves at the expense of their brothers and sisters. The soldiers needed to stop using their power to extort the people they were supposed to protect. Repentance is where practice is made to match profession.

Wonder what he’d say to us, church people, who strut around wearing labels like “New Testament Church” or “Evangelical” or even “Christian,” and forget to look at ourselves long and hard enough to make sure that who we really are matches the labels we wear? God, after all, can still raise up New Testament Churches or Evangelicals or Christians from the rocks, if need be. He doesn’t need our glowing self-characterizations and wordy professions of faith, which are more useful for hiding what we don’t want to face about ourselves than bringing about the lives of faith and devotion that he really wants.

I think he says the same thing now that he said then: “Produce fruit in keeping with repentance.” Sync your walk up with your talk. Look for the places in your life where conflict exists, and honestly ask yourself what you have to do with creating that conflict. Do you need to reconcile with someone? Change some relational habits? Make restitution for something you’ve done? Show more love, patience, and gentleness? Back off on the fault-finding?

Cultivate an attitude of repentance, and I’m convinced that the Holy Spirit will make the specific areas where you need it clear to you. Repentance isn’t something we only do at church on Sunday morning. It’s for the office on Tuesday morning and home on Thursday night and the basketball court on Saturday afternoon. It’s worked out in relationships and choices and habits that affect every part of your life.

“The axe is at the root of the tree,” warns John, not really to scare us, but to remind us of the urgency of repentance. God will call us to account. He’s not looking for completely pure hearts, but he is looking for penitent ones. He’s looking for people who are willing to look in the mirror and own up to what’s there without defense, pretense, or self-justification. He can work with people like that. He can shape them and mold them into the people he wants them to be.

So face the mirror, and face the music. And watch with joy the transformation he’ll bring about in you.