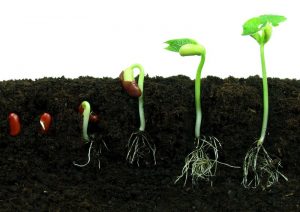 Tuesday. Read 1 Corinthians 3:5-9. 1) How does Paul use the idea of seeds to talk about our work as proclaimers? 2) Whose responsibility is it for a seed’s growth?

Thursday. Read Romans 14:5-9. 1) What is the main subject of this text? 2) What does Paul say about the benefits of continuing to live or dying?

Friday. Read 1 Corinthians 15:35-39. 1) How does Paul compare planting a seed in the ground and death? 2) Ultimately, what happens to a person after death?

Dear Father. We thank you for sending Jesus. Jesus has shown us the way through death, and also that death is not the end but rather the way to life and victory. May we be courageous as we face what the world calls defeat, loss, and the end. Help us to stalwartly face the way we choose to follow you through death and toward victory. In Jesus’ name. Amen.

The sands of time are sinking,
the dawn of heaven breaks,
the summer morn I’ve sighed for,
the fair sweet morn awakes;
dark, dark hath been the midnight,
but dayspring is at hand,
and glory, glory dwelleth
in Emmanuel’s land.

The King there in his beauty
without a veil is seen;
it were a well-spent journey,
though sev’n deaths lay between:
the Lamb with his fair army
doth on Mount Zion stand,
and glory, glory dwelleth
in Emmanuel’s land.

O Christ, he is the fountain,
the deep sweet well of love!
The streams on earth I’ve tasted,
more deep I’ll drink above:
there to an ocean fullness
his mercy doth expand,
and glory, glory dwelleth
in Emmanuel’s land.

The bride eyes not her garment,
but her dear bridegroom’s face;
I will not gaze at glory,
but on my King of grace;
not at the crown he gifteth,
but on his piercèd hand:
the Lamb is all the glory
of Emmanuel’s land.

Unless a Seed
by Phil Ware and James Nored

Jesus had many opportunities to walk away from the shame and pain of the cross, but he chose the Father’s will and our need over his comfort.

[Jesus said,] “The hour has come for the Son of Man to be glorified. Very truly, I tell you, unless a grain of wheat falls into the earth and dies, it remains just a single grain; but if it dies, it bears much fruit. Those who love their life lose it, and those who hate their life in this world will keep it for eternal life. Whoever serves me must follow me, and where I am, there will my servant be also. Whoever serves me, the Father will honor.

“Now my soul is troubled. And what should I say — ‘Father, save me from this hour’? No, it is for this reason that I have come to this hour. Father, glorify your name.”

We must be reminded of the many opportunities Jesus had in his final week to walk away from his path to the cross. He emphasizes how all of Jesus’ earthly friends forsook him in his most distressing moments of the Passion. He reminds us how Jesus withheld his power over-and-over again as his enemies mocked, belittled, and abused him. Most of all, James tells us that the Lord Jesus did this for you and me. He did it so that we could be brought back and bought back into a relationship with God.

If you can’t see the video, and you sure don’t want to miss it, view it online. For additional ideas to consider and some things to discuss with others, we encourage you to see the Study Guide.

The haunting music in James’ video presentation reminded me of the eerie statement of Jesus about the seed falling on the ground and dying. If the seed hadn’t given up its life to the soil, it would have remained alone. Grab that thought! It remains alone. Jesus gave up the temporary company of his disciples and withheld his power to defeat the forces of sin, death, and hell, so we wouldn’t ever have to fear them, so we wouldn’t have to be isolated and alone as we faced their presence in our lives or deaths (Hebrews 2:14-18).

Why did Jesus’ withhold his power, submit to his Father’s will, and allow himself to be crucified? He did it to become that seed that would fall on the ground and ensure that we could join him as children in the Father’s house. He chose to be alone through his Passion so we could be his forever — so that we could be the many seeds produced as the fruit of his death.

To accomplish this for us, however, Jesus faced the aching loneliness of being alone in the most trying of times. He was abandoned by his apostles in the garden. Peter, his most vocal leader, denied having ever known him. Judas, one of his twelve carefully chosen apostles, betrayed him with a kiss for money. Jesus, the Creator of the universe, came to his own things — his own world he had created — yet his own people rejected him with derision and cruel mockery.

Jesus offered himself as our ransom payment to bring us life with the Father (Mark 10:45). Jesus chose to see glory, to see his exaltation as king, as his being was lifted up on the cross (John 12:32-33). As a mortal, the King of glory would have preferred a different path. He prayed to his Abba Father for another way. As the Son of God, however, he chose the way of the Father and all that it would cost him. He did it so that we would not have to pay the same cost with our lives.

Jesus chose the way knowing that he would be humiliated, mocked, beaten, abused, berated, ridiculed, abandoned, and murdered. He had told the apostles what was waiting for him in Jerusalem repeatedly as they made their way there that last time. Usually, this grim fate implied weakness, defeat, and discrediting failure. With Jesus, however, the meaning of the cross took a different twist: it meant obedience, love, and life. He was the seed that fell on the ground and died to produce many other seeds.

Crucifixion was too shocking in his time to be discussed in polite conversation. Jesus, however, turned his cross into the symbol of triumph over hell, death, and the demonic realm (Colossians 2:15; 1 John 3:16). Love triumphed over hate. Sacrifice conquered the abuse of power. Obedience won over the cunning manipulations of false religion and corrupt politics.

In Jesus’ day, to think of a crucified hero in Gentile culture was absolute stupidity (“moronity” is the term Paul uses — 1 Corinthians 1:18, 20-23). To call a crucified man “Savior” was highly offensive in the Jewish world. A crucified man was deemed cursed by God (1 Corinthians 1:23; Galatians 3:13; cf. Deuteronomy 21:23). Nevertheless, Paul proudly proclaimed this “foolish” message of the cross was the power of God that reached into human hearts (1 Corinthians 1:18). He was the seed that fell on the ground and died to produce many seeds. He chose to be alone for the Passion so that we could share life for eternity.

As followers of Jesus, we see God’s love and redemption tied to that Roman cross, those jeering Jewish mobs, and his abused body. He withheld his power to offer us his grace. He spoke forgiveness over the jeering mob to remind us of his mercy. He chose love over hate to provide our world hope for a better future. And when he breathed his last, his willingness to follow the path of love, compassion, and grace reached the hardest of hearts:

And when the centurion, who stood there in front of Jesus, saw how he died, he said, “Surely this man was the Son of God!” (Mark 15:39).
Our response? I believe the famous hymn writer, Isaac Watts, said it best:

Were the whole Realm of Nature mine,
That were a present far too small;
Love so amazing, so divine,
Demands my soul, my life, my all.

Jesus was proven correct. Unless a seed falls on the ground and dies, it does remain alone. So, the Lord Jesus chose the cross. He decided to be that seed that died alone. His one sacrifice has produced more seeds than any mortal can count.