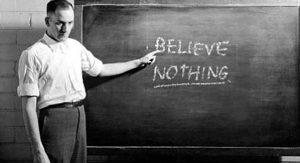 Nihilism (/ˈnaɪ(h)ɪlɪzəm, ˈniː-/; from Latin nihil ‘nothing’) is a philosophy that holds that human values are baseless, that life is meaningless, that knowledge is impossible, or that some set of entities do not exist.

The term is sometimes used to explain the general mood of despair at a perceived pointlessness of existence. Some theologians and religious figures have said that postmodernity represents nihilism by a negation of religious principles. Nihilism has, however, been widely ascribed to both religious and irreligious viewpoints.  Nihilism – Wikipedia

It is important for the disciple of Jesus to realize the effect of nihilism both on our culture itself as well as on Christian disciples. It is also important to know that Christian faith and nihilism cannot exist in the same room. Yet how often I have heard Christian people espousing ideas that have their root in nihilism as well as in the relativity of post-modernism. Christianity is a belief system noted by its certainty, which we call faith. It gets expressed in this way.

1. In a belief in a basic, knowable truth. Jesus said that we “will know the truth.” Alan Bloom in The Closing of the American Mind, “There is one thing a professor can be absolutely certain of: almost every student entering the university believes or says he believes, that truth is relative.”  A prevalent indicator of this today is the saying, “Your truth/my truth.”

2. In basic trust for others.  Not gullibility or naivete but trust founded on relationship and faithfulness.  So if someone you trust in the Christian way gives a bit of knowledge or advice for which you’ve asked, it is the nature of our relationships with each other that such statements are taken in trust.  In a nihilistic world, no one is trusted.  And nothing is considered to have any truth or reliability.  You can see how nihilism erodes trust.

3. In basic optimism.  Christians believe that they can change the world through the faithfulness of Jesus.  This is why you often see Christian people binding together to help tornado victims, or serving food to the homeless, or volunteering at a vaccine clinic.  Christians see all these things as contributing to the fabric and the future of the world.  Nihilistic people can’t be optimistic because they mistrust and disbelieve everything.  You hear it in the person who says, “the government is trying to insert chips in our body through the vaccine.”  See #6 below.

4. In social participation.  Nihilism erodes human connection.  I think this is one of the causes of the erosion of church involvement.  Why would one want to participate in something you can’t trust?  (I realize there are other reasons for a slowing of church involvement, however, this is one contributor.)  One of the things that struck me about Mother Emmanuel AME in Charleston, SC was the way they recovered from the horrible, tragic shooting in which nine people were killed in 2015 by a shooter.  I would suggest to you that such recovery would not be possible if they were nihilists.  Nihilists would believe that a) the shooting proved that life is meaningless, b) that withdrawal rather than staying connected was the only way to preserve their lives, and c) that the shooter deserved revenge for what he did.  (If there is no knowable core truth on which to depend, then do what you feel like doing.)

5. We already said this, but it warrants being said again.  Nihilism gets expressed in the disbelief, that even Christian politicos express, in scientific, factual, knowable, measurable truth IF it conflicts with anything they believe.  I had a friend say recently that more people died from SARS than from Covid-19.  In phone conversations and letters, I told him that only 774 people died from SARS and to date we have over 3 million deaths worldwide from Covid-19.  Christians must believe the truth and tell the truth, but this is in conflict with Nihilism.

6. The Lord’s prayer also has something to say about this.  In Jesus’ words, we pray that “may your kingdom come and your will be done ON EARTH as it is in heaven.”  If we pray that and if we believe that, we must believe that good things must be a sign of God’s answering this prayer.  For example, giving everyone the right to vote, making health care available to the poorest and weakest, and giving us amazing new medical discoveries such as mRNA vaccines for an array of diseases.  How can we pray that prayer and then doubt that anything can be known with any trust?  I personally think we should calmly rebuke people who say things like “they just want us to get the vaccines in order to put microchips inside our bodies.”  That reflects no confidence or faith in God’s work.

I hope I have caused you to think about a toxic philosophy that you may have embraced without thinking about it.  More than that, I hope you will think seriously about the life to which Jesus calls you to live.  And the full implications of that life.  For a diagram of the spread of Nihilism go to this link.