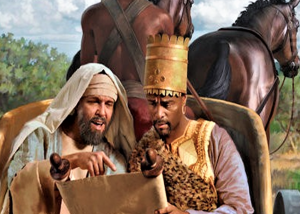 Monday, April 26. Read Isaiah 53. 1) Isaiah 53 was written to Babylonian era Israel. Why do you think this text spoke so loudly to first century disciples? 2) What do you think Philip said to the eunuch (based on this text)?

Tuesday, April 27. Read Philippians 2:5-11. 1) Scholars think this might have been an ancient hymn. Why do you think this passage so eloquently spoke to first-century Christians? 2) How would it have been confirming and inspiring to them?

Wednesday, April 28. Read Isaiah 56:3-8. 1) What do you learn about God’s point of view regarding people society might reject? 2) What theological connection do you see between this text and the call for Philip (in the sermon text) to “join the chariot going south toward Gaza?”

Friday, April 30. Read Acts 11:1-18. 1) In this text Peter explains why he interacted with the Gentile Cornelius. 2) How did Peter become so convinced. 3) How do you think the Jerusalem church responded to the news of, first the Eunuch, and then Cornelius?

Triune Father, even you are father, son, and spirit. When you created us you said “Let US create humankind in our own image.” In humanbeings is the DNA of community. Of belonging. Of collaboration. We were not meant to be alone. Help us to remember that faith is a team sport. In Jesus’ name. Amen.

This poetry/hymn was chosen for this week because of the way that it praises Jesus. When Philip told the Ethiopian Eunuch about Jesus, the Eunuch must have felt similarly about the One described for him in Isaiah. Even more so after following Jesus into baptism and the Eunuch’s own symbolic death. Majestic Sweetness, truly.

‘What prevents me from being baptized?’
The Ethiopian’s question
by Tim Archer

“What prevents me from being baptized?” It was a question asked with a mixture of hope and resignation. It came from a man who was used to being told that he wasn’t good enough or whole enough or man enough. Now he was waiting to be told why he couldn’t become a Christian.

This man was an official of the queen of Ethiopia. He was also a eunuch, having been castrated to enable him to work in close proximity to the queen, a common practice in ancient times.

We read his story in chapter 8 of the book of Acts in the New Testament. This man was returning from a trip to Jerusalem. Apparently he was a Jew and had gone to worship in the temple. However, as a eunuch, he wouldn’t have been allowed to enter the temple. Jewish law didn’t allow it. As had happened so often in his life, this man had been told he wasn’t able to do what others could do.

As he traveled through the desert, making the long trip back to Ethiopia, he read from the book of Isaiah. We don’t know where he got the scroll from; personal copies of the Bible weren’t common then. Maybe he bought it in Jerusalem. The book of Isaiah has a famous passage with promises for eunuchs (Chapter 56); maybe he had purchased the scroll for that reason.

As he traveled and read, he began to puzzle over some of what he was reading in Chapter 53. A man named Philip approached the chariot and asked if the eunuch understood what he was reading. The eunuch admitted he didn’t, that he wasn’t sure who the prophet was talking about. Philip taught this Ethiopian man about Jesus, using Isaiah 53 and other passages.

In explaining the good news of Jesus, Philip obviously mentioned baptism, for when the eunuch spotted a body of water, he said, “There’s water! What prevents me from being baptized?” He was waiting for Philip to explain that salvation wasn’t for eunuchs, that only whole people could be a part of God’s kingdom. Instead, Philip assured him that everyone with faith could come to Jesus in baptism.