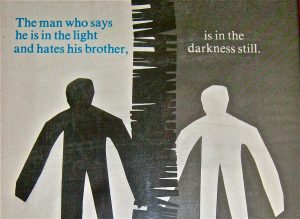 14 If we love our brothers and sisters who are believers,[b] it proves that we have passed from death to life. But a person who has no love is still dead. 15 Anyone who hates another brother or sister[c] is really a murderer at heart. And you know that murderers don’t have eternal life within them.

16 We know what real love is because Jesus gave up his life for us. So we also ought to give up our lives for our brothers and sisters. 17 If someone has enough money to live well and sees a brother or sister[d] in need but shows no compassion—how can God’s love be in that person?

This text is about social obligation. John, the author of this text, was writing to a church community that was torn by controversy. Some of its members had even left to join something else. One of its members, named Diotrophes, was said to “love the preeminence and loved to put himself first.” All of this was a mark of loveless relationships. While this letter was written to the church (probably of Ephesus), the principles set forth here are often applicable to other relationships as well.

First of all, Jesus command to his disciples to love and serve one another is a broadly applicable idea. Things like living in a neighborly way, not seeking revenge, treating others in the same manner we want for ourselves, and giving up one’s coat for someone in need are all ideas that govern our human relationships and good definitions of love.

Second, disciples of Jesus are called to live in an aware manner in the world. The rich man in Jesus’ parable walked by the beggar Lazarus every day as the rich man left his house – never attending to Lazarus’ medical care, never giving him food, and never speaking to him. Lazarus might as well have been a large rock lying by the path. In the parable, the Rich Man is cursed because of his indifference. Luke 16:19-31. John says it is inconceivable that a disciple of Jesus would ignore the needs of a brother or sister.

Finally, John said that love is the enlivening principle of life. Love causes one to be generous, kind, compassionate, attentive, and expressive. Without love we are the opposite – miserable, self-absorbed, pessimistic, and suspicious people. Always grasping and defending what we regard as our own.

In other words, John said that to live in the world like a disciple of Jesus is to feel connection and obligation to the rest of our fellow-dwellers.

God of love. Through your Son Jesus Christ you have shown us in perfect clarity what it looks like to be a loving person. Jesus who touched lepers, healed Gentiles, ate with riff raff, and condemned the wealthy calls us to live similar lives. Lives that are directly opposite much of what we see lived out in our world. We ask you to fill us with your Spirit of Love. Make us attentive and kind to the people around us. Wake us up. In Jesus’ name I pray this. Amen.