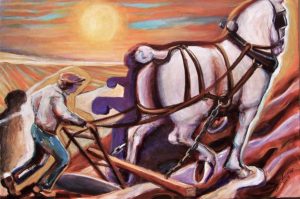 The text for this meditation comes from Luke at a time when Jesus’ attention is turned toward Jerusalem. You can almost feel the urgency and intensity of Jesus, as well as his disciples. Earlier in chapter 9, Jesus takes Peter, James, and John up on a mountain where he was transfigured, and John the Baptist with Elijah the prophet appeared. Later, the apostles began to argue about who was the greatest, whereupon Jesus took a child and said, “The least among you is the greatest.” It was not what the apostles expected Jesus to say.

And then this. Some bystanders on the road thought it would be interesting or desirable to be one of Jesus’ followers. You can call this Jesus’ opportunity to create a following by attractional evangelism. One actually offered to be a follower. “I’ll follow you anywhere.”

But Jesus is no easy Messiah. He says something like, “Let me be perfectly clear.” This was followed by striking down three of the excuses that “religious” folk often use to excuse themselves from discipleship.

The first excuse is that following Jesus is not convenient or easy. Jesus warns that foxes and birds have better accommodations than he does. What do you think he would say to 21st century Christians sitting in luxurious church buildings listening to professional musicians?

The second thing Jesus says seems like one of the most onerous things Jesus ever said. A would-be follower said, “I’d be happy to follow you but first I have to bury my father.” Some think that the man was saying that his discipleship would have to be delayed until his father finally died, however long that took. Others think, of course, that the father had already died and the son need to go to the funeral. Either sense makes one realize how much Jesus demands full allegiance. On two different occasions, it becomes clear that Jesus will permit no greater loyalty, including family.

The third thing Jesus says is in reply that a would-be follower wanted to say farewell to people at home. “No one who puts a hand to the plow and looks back is fit for the Kingdom of God.” Possibly a way for Jesus to say that nostalgia and regret cannot be a part of a disciple’s demeanor. Discipleship requires straight-ahead determination. Looking at where the plow leads rather than dwelling on the past.

A campus minister I used to know, had a vibrant ministry at the University of Washington. Among the students he got to know was an Iranian woman named Scheherazade. She started to come to the various fellowships and get-togethers that the campus ministry held on campus. Eventually, she came to know about Jesus and was invited to be baptized. She told my friend that if she did that she would no longer be able to go home to visit her family, else she would be arrested and killed. Her father talked to my friend by long-distance phone call and asked him to take care of Scheherazade because he knew that he would no longer be able to see her.

What I am suggesting is that Scheherazade fully understood what Jesus was asking of her pertaining to her commitment. What about you? Do you, like so many Americans, have a relationship to Jesus based on convenience or the better offer. In other words, Jesus is your friend as long as there is no better offer.

God of Scheherazade who knew that you were inviting her into a relationship of commitment. Indeed, you invite us all to give our lives over entirely to you. May we understand that you called us to a cross, not a coffee shop. You asked us to willfully devote our lives to your service and your worship. Please be with us and help us to see the things that would steel our affections. In Jesus’ name we pray this. Amen.