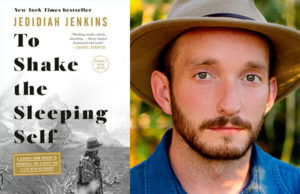 My granddaughter, Jenna, sent me a book recently; she found it in the Tampa airport. She is a bookworm and reads really good stuff, so I take notice if she say’s “read this.”

The book chronicles the bike ride of a gay man from Oregon to Patagonia, Chile, almost to the very tip of South America. In this case, “gay” is important to what I am saying.

The bike trip, as you might guess, was an occasion for reflection for Jedediah Jenkins, the author. During which he ruminated on what it meant to be gay as well as a Christian. Living in San Diego at the time, he said that he had never seen anyone model what it looked like to be a gay Christian man. And his conclusion at the time was that being gay must corrupt one’s relationship with God.

Discussing this with a friend, the friend said, “Jed, there’s always someone that goes first. Maybe God wants you to be that person in your community. Be the godly Christian gay man you wish you’d seen.”

And then this. Jed replies, “I was shaken. I’d expected to be told and shown, not commissioned.” To Shake the Sleeping Self, page 131.

I’m so inspired by this statement. “I’d expected to be told….not commissioned.” Isn’t that what most of us would say. We want it to be easy and all figured out for us. God forbid that we should have to dwell in uncertainty and mystery. “What do I do next?”

But life truly is more like being commissioned than being told. It’s because of being commissioned that Boyan Slat, a Dutchman, 16 years old at the time, began to think of ways to corral ocean plastics that would be turned into useable products or oil. One person takes responsibility for a problem and creates a solution.

What if people with integrity stepped up to begin solving problems? The world would be a better place. So also the church. Businesses too. And governments. Imagine what could happen to homelessness, hunger, violence, incarceration, and a host of other problems. It’s not that there is no one working and taking responsibility. But imagine what would happen if we all shared the “commission.”

I’m reminded of two people in the Bible who got the truth of the “commission.” One was Esther, a young Jewish girl chosen by the King of Persia to be his Queen. When weighing a difficult and critical decision, Esther’s uncle reminded her, “…if you keep silence…relief and deliverance will rise for the Jews from another quarter, but you and your father’s family will perish. Who knows? Perhaps you have come to royal dignity for just such a time as this.” Esther 4:14.

Esther took the mantle of responsibility to ultimately save her people.

The other text is from Isaiah 6. In a vision that Isaiah had, he heard God’s voice saying, “Whom shall I send, and who will go for us?”

Isaiah 6:8 has Isaiah’s reply. “Here am I; send me!” It’s the reply of someone who accepts the commission. It’s not unlike the commission that Jedediah Jenkins felt, to be a model of a godly gay Christian man. Or like Boyan Slat who looked at the pollution in the oceans and accepted the commission to find a solution.