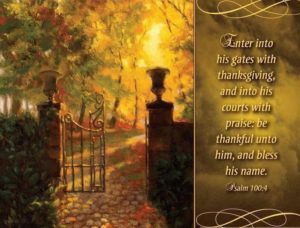 Monday, November 15. Read Philippians 1:3-9. 1) What is the first thing that Paul prays? 2) What is the basis of his gratitude? 3) What was the result of Paul’s gratitude?

Tuesday, November 16. Read 1 Thessalonians 1:2-10. 1) How does Paul begin his letter to this church? 2) Why does Paul say he is grateful for them? 3) Think about LifeSpring. For what would you tell God you are thankful in her regard?

Thursday, November 18. Read Romans 14:1-6. 1) How does Paul say we should treat people who are weak in faith? 2) Do our food choices affect our relationships? 3) What act (vs. 6) shows that eating is doing with God in mind?

Friday, November 19. Read Ephesians 5:15-20. 1) How would you say that Paul told the Ephesians to live? 2) What sort of worship does Paul reference in this text? 3) What act serves as a sort of foundation on which the rest is done (vs. 20)?

Dear Creator and Giver of every good thing. On this Sunday before our day of Thanksgiving, we acknowledge that we often live ungrateful lives. Unable to see the abundant ways that you enter our lives and bestow on us good and winsome expressions of your love and generosity. Please open our eyes to the many ways your bless our world and help us to be immune to the consumption and greed of the world. In Jesus’ name. Amen.

Now thank we all our God
by Martin Rinkart, 1636

Now thank we all our God
with heart and hands and voices,
who wondrous things has done,
in whom his world rejoices;
who from our mothers’ arms
has blessed us on our way
with countless gifts of love,
and still is ours today.

O may this bounteous God
through all our life be near us,
with ever joyful hearts
and blessed peace to cheer us,
to keep us in his grace,
and guide us when perplexed,
and free us from all ills
of this world in the next.

All praise and thanks to God
the Father now be given,
the Son and Spirit blest,
who reign in highest heaven
the one eternal God,
whom heaven and earth adore;
for thus it was, is now,
and shall be evermore.

Gratitude that Costs Us Something
How can we be thankful without doing something significant?
by Patrick D. Odum

Let the peace of Christ rule in your hearts, since as members of one body you were called to peace. And be thankful. Let the message of Christ dwell among you richly as you teach and admonish one another with all wisdom through psalms, hymns and songs from the Spirit, singing to God with gratitude in your hearts. And whatever you do, whether in word or deed, do it all in the name of the Lord Jesus, giving thanks to God the Father through him (Colossians 3:15-17 TNIV).

Earlier this month, 22 people got off a train at London’s Liverpool Street station. The only unusual thing you’d have noticed about the group was its age: all of them were in their 70’s and 80’s, looking like they were on a retirement home field trip. And in fact it was a field trip, of a sort. But not a pleasure trip, not really. More like a pilgrimage.

The last time they made the trip — from Prague — was seventy years earlier. Back then they had been Jewish children, 669 of them, whose parents had lost jobs and homes to the Nazis. Their parents had packed them off to new homes in London, hoping to join them later. None did, though. The concentration camps saw to that.

But those children got the chance to survive. They grew up and had children and grandchildren and even great-grandchildren of their own. But they never forgot what could have been, or that they had been saved from their parents’ fate. Seventy years later, 22 of those 669 made the trip again to remember.

More than to just remember, though. The man who met them on the platform at Liverpool Street this time was the same one who met them seventy years ago. His name is Sir Nicholas Winston, although seventy years ago he wasn’t Sir Nicholas. He was a stockbroker in London in 1939, when a friend in Prague told him about the Nazi occupiers taking away the jobs and homes of Jews in the city. Nicholas began to raise money, begged the British government for visas, forged papers, and found British families willing to adopt children. Then, when he had everything in order, he chartered the trains that saved those 669 children from being murdered in the camps. He met them the day they arrived. And he met them again, seventy years later. He’s a hundred years old now, but he leaned on his cane and shook hands with each of those 22 grateful people and received their thanks.

They told him about their children and grandchildren. There are, they say, 7,000 descendants of the children Nicholas Winston saved all over the world. Seven thousand people who know the story of how a London stockbroker saved their parents, their grandparents, their great-grandparents.

With typically English reserve, Nicholas seemed to enjoy being there. “The trouble 70 years ago was getting them together with the people who were going to look after them,” he said. “I’ve got no responsibility this time.”

There’s something fundamental about gratitude. Something basic. That’s why we teach our kids to say “thank you” and make them write thank-you notes when someone gives them a gift. It’s hardwired into us, I think, that it’s only right to be grateful when someone does something for us. But just because it’s hardwired into us doesn’t mean that we always remember. Though God may have created us with the capacity for being grateful, the damage sin does in us includes turning us inward. The consequence is a self-centeredness that tends to notice only what we don’t have while forgetting the blessings we’ve been given. The result is that we become unable to be grateful.

That’s why gratitude is a theme that the Bible returns to again and again. “Be thankful,” Paul tells the church in Colosse, and then two verses later says, “whatever you do, whether in word or deed, do it all in the name of the Lord Jesus, giving thanks to God the Father through him.”

There are basic spiritual sicknesses for which gratitude is really the only existing remedy. Selfishness. Bitterness. Hate. Greed. Lust. All of these have a common cause: obsession with ourselves and what we perceive to be lacking in our lives. Gratitude, however, calls our attention to what we have, and to how much of it has been given to us by God for no other reason than that he loves us. When we’re thankful, our attention is on him and what he has blessed us with.

Sometimes, though, gratitude is a lot of trouble. Twenty-two people taking a train across Europe? Wouldn’t it have been more efficient for everyone to write a note? Send a gift? Well of course it would have been. But then, efficiency isn’t the point, is it? The point is gratitude. And unless gratitude costs you something — a little inconvenience, at the very least — well, it’s just not much, is it? You can talk about how thankful you are, but gratitude is one of those inward attitudes — like love and faith and hope — that aren’t real unless they bring about a difference in the way we live and the things we value.

That’s why God told the Israelites to give thank offerings — not because he needed their cattle and goats, but because they needed to express gratitude that cost them something. And you don’t think, do you, that just because we’re not Israelites we’re somehow exempt from gratitude that costs us something? You don’t really think, do you, that we who have heard the good news of Jesus, who have been saved from death by his sacrifice, have only to nod and wink and say, “Thanks, God?”
That’s what worship is, of course: gratitude that costs us something. It’s an indicator of how far we’ve drifted that to us “worship” is to be evaluated by how it makes us feel:

I urge you, brothers and sisters, in view of God’s mercy, to offer your bodies as a living sacrifice, holy and pleasing to God.” That, Paul told the Christians in Rome, is “true worship (Romans 12: 1).

Our calling is to offer ourselves — our energy, our priorities, our possessions, our passions — as a thank offering to the God who has shown such mercy to us.

What do you think our children and grandchildren will remember about us? My prayer is that my son, and his children, will remember me as someone who was saved by God’s grace through Jesus and who lived a life of thanksgiving. I want them to remember me as someone who had gratitude in his heart, and who did everything he did as an expression of thanks to God. Not so they’ll speak well of me, but so they’ll remember the God whose grace for which I was so thankful.