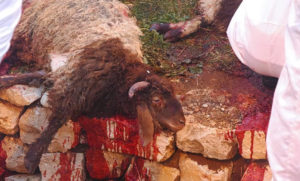 Monday, March 22. Read 1 Corinthians 11:23-26. 1) What did Paul say he “received from the Lord”? 2) What is the context of this recollection? 3) What did Paul learn about the symbolism of the bread and wine?

Tuesday, March 23. Read Psalm 40:1-8. 1) For what reason is the Psalmist praising God? 2) What is the source of the psalmist’s happiness? 3) What does the psalmist say God wants from us?

O Christ, you came to do what no one else could do. You knew that the blood of animals is just that and nothing more, only reminding us in the death of a poor creature of the extent of our failure and sin. But you, O Lord, have given your perfect life on our behalf. Defeating forever the scourge of sin and death and giving us life in its place. For this we praise you. In your name we pray this. Amen.

Hymn of the Week

Alas! and did my Savior bleed,
and did my Sovereign die!
Would he devote that sacred head
for sinners such as I?

Was it for crimes that I have done,
he groaned upon the tree?
Amazing pity! Grace unknown!
And love beyond degree!

Well might the sun in darkness hide,
and shut its glories in,
when God, the mighty maker, died
for his own creature’s sin.

Thus might I hide my blushing face
while his dear cross appears;
dissolve my heart in thankfulness,
and melt mine eyes to tears.

But drops of tears can ne’er repay
the debt of love I owe.
Here, Lord, I give myself away;
’tis all that I can do.

The Forgiveness Ad
What does it take for God to his message to you?
by Rubel Shelly

Larry and Marianne have been having problems in their marriage of 17 years. She finally left him just over two weeks ago. “It was a culmination of things,” he said. “But I am desperately trying to save our marriage.”

Marianne left their home in Orlando, Florida, and went to her parents’ home in Jacksonville. She changed her cell phone number so he couldn’t reach her. Her parents have blocked him from entering their gated community. So he sent her five dozen roses. His goal was just to communicate. To ask forgiveness. To plead for the chance for the two of them to work on their relationship.

Lacking any response from his estranged wife, Larry took out a full-page ad in last Tuesday’s Florida Times-Union. “I can only hope you will give me the chance to prove my unending love for you. Life without you is empty and meaningless.” The cost of a full-page ad means that Larry sent Marianne a $17,000 apology.

I don’t know any more of the story. I have no opinion on the salvageability of their marriage. I hope things can be worked out between them, for relationships are ultimately all that matter in this life. But the story sounded strangely familiar.

Redeemer God has been on a mission for centuries now. Although he is the aggrieved party, he has been taking it upon himself to communicate with his estranged creatures. Loving us as a concerned Father who is grieving his prodigal sons and daughters, he has struggled to communicate his deep love and concern.

In the past God spoke to our forefathers through the prophets at many times and in various ways, but in these last days he has spoken to us by his Son …. (Hebrews 1:1)

How are we to understand this biblical text?

After sending Moses and Deborah and Isaiah to deliver dozens of pleas and warnings, it was time to pull out all the stops. When the roses had been ignored, he put a billboard on a hilltop just outside Jerusalem. Written there for all the world to see, he declared his intention to heal a broken relationship.

In a forgiveness ad that cost far more than full-page ads in The New York Times, London Telegraph, and Pravda, God wrote his message in blood. He said that you mean more to him than life itself. That there is nothing he would not give to have a relationship with you. That he will not give up on you without a fight.

A relative told Larry that his wife had seen his message. “She said my wife read the ad and started crying,” he said. “But so far I’ve had no response from her.”

I suspect you’ve heard about God’s forgiveness ad. I’d be surprised if it has not touched you. I hope you won’t leave him wondering about your response.