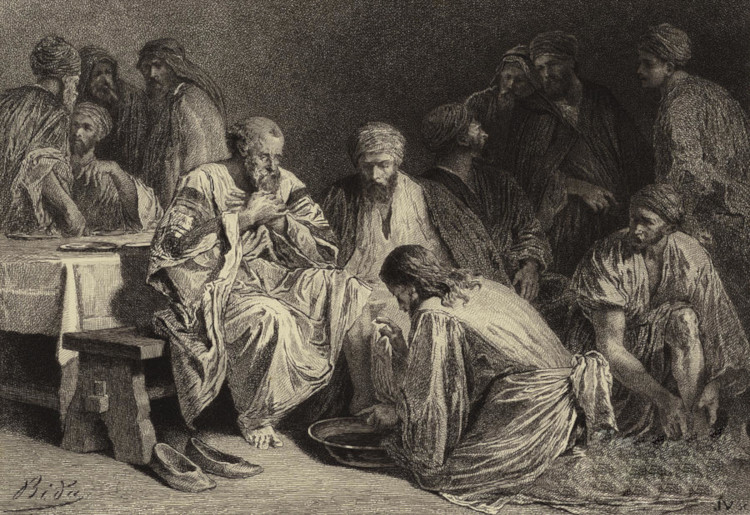 Today is the last day of Lent.  Tomorrow the world slips into darkness and only reemerges on Easter morn.  With the disciples, we stand on the edges of a horror movie that begins with a hypocritical kiss from Judas, an angry mob, and a kangaroo court.  And we wait.

Today is the day that Jesus gave his disciples that which would enable and empower them through the horrible experience they were about to have.  In a non-descript room somewhere in Jerusalem, he ate a final, significant meal with them.  After this he would be seized and taken away.

Today is the day that Jesus arranged to eat with the twelve what had the marks of a usual Passover meal.  However, Jesus recast it for them.  Going forward from this moment, the disciples would never be able to eat a Passover meal ever again with old understandings.

At the usual observance of the Passover, it was normal practice to engage in a ceremonial washing of the hands during the meal.  However, Jesus arose from the table, took a bowl of water and a towel and began to wash the disciples feet.  They were aghast; their teacher and master washing their feet.  Jesus concluded this act by saying, “I’ve left this as an example for you.  You should wash each other’s feet.”  John 13:14.

In this centuries old meal of observance, Christ turned their attentions to loving one another and the future of their relationships with each other.  This was not a meal of farewell or regret.  It was clearly hopeful.

Then, as Matthew records, Jesus recast the elements of bread and wine.  Calling the bread, his body, and the wine, his blood, they would think less about Egypt and the meal of freedom they ate then and more about what they were about to experience in the next three days.  Luke has a great story about people Jesus encountered, post resurrection, and how a simple meal with bread opened their eyes in a new fashion.  Luke 24:30-32.

Matthew said that Jesus told the twelve, “I will not drink this cup again with you until the day I drink it new with you in my Father’s kingdom,” Matthew 26:29.  Hope infused this meal in a way they had never experienced it.  Jesus was saying, “We’ll be having this meal again in the future.”

Thursday was filled with pathos.  The last day Jesus would spend with his disciples, the violence and grief they would witness, and apparent hopelessness of the moment.  But when looked at carefully was littered with breadcrumbs that Jesus sprinkled for them.  And that began to dawn on them slowly beginning on Easter day.

Christ of both the howling mobs and the empty tomb, we want to go through these next three days with you.  We want to be reminded of how the disciples negotiated the incredible pain as well as how they experienced ecstatic joy seeing you by the tomb and on the beach with roasted fish.  May those images keep us faithful to you and able to endure the pains of our own day.  In Jesus’ name.  Amen.