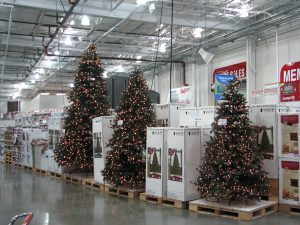 All you have to do is walk in Costco in October, and the crisis of misplaced priorities his you in the face.  Christmas displays begin to tease from the warehouse of groceries, commercial items, and home supplies.  Purchase, purchase, purchase is the message.

….and we are seduced by it.

Here are some ways that Christmas as a God-event can be separated from Christmas the commercial event through remembering.

1. Remember that Christmas doesn’t get any press in the Bible.  The whole “Christ-mass” thing is a human invention.  The Bible is focused on the death, burial, and resurrection of Christ.  Some think Christmas as a “celebration” was begun in reaction against a pagan Roman holiday.  Attempts to Christianize the holiday are generally failed do to the fact that they are wrapped in tinsel and light.  It’s hardly a picture of the birth story, much less the cross story toward which it pointed.

2. Remember that the things listed by commercial establishments as important, AREN’T.  They generally appeal to the shallowest, most self-centered, and selfish side of humanity.  Not only that, the morning after Christmas, many of those sparkly things will begin to lose their appeal as well their claims of fulfillment.  No “thing” in this world will ever be able to bring contentment and satisfaction of the ultimate sort.

3. Remember that the birth set the stage for a life of service and suffering.  Paul told the Philippian church that Jesus’ life on this earth was marked by what he gave up and how he served.  It ultimately led to a victorious end, but not before the terrible cross-death.  In the same way, service and suffering are far more pleasing in their result than the glitter under the Christmas tree.

I hope you will have a Christmas day that contains time for reflection, worship of our Creator, and perspective that keeps you from being distracted by the national holiday.