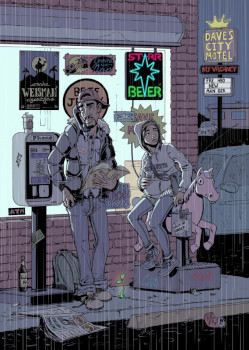 Christmas is next weekend. Because of that, I decided to run this modern-day take on the Joseph and Mary story. Drawn by Everett Patterson, the sketch has over twelve biblical and religious references to the Nativity story. The object of the drawing is to see how many you can find. For a larger format of the sketch, go to this URL.

Everett Patterson of Portland, Oregon drew this sketch for his Christmas card, 2014. I think you will enjoy his rationale in this lovely drawing. Read his comments below.

Patterson’s Rationale for the Drawing:

This was our Christmas card for 2014, depicting Jesus’s parents in a modern setting. I was inspired by a number of evocative “imagine what it would have been like”-type sermons I heard earlier this year, and also (as usual) by the work of Will Eisner, who so often depicted, with religious reverence, noble individuals enduring the many minor discomforts and petty indignities of urban America.

The main goal of this illustration was to pack as many clever biblical references into the scene as possible. I won’t list every one (there are at least a dozen), but a few that I’m proudest of are: the verse from the prophet Ezekiel in the graffiti on the phone kiosk, the way the “Save More!” behind Mary’s head looks kinda like “Ave Maria!,” and the two ads for “Glad” and “Tide” on the newspaper (get it?).

A word on perspective: for this image, I chose very, very wide vanishing points. The result is what I occasionally call “middle-class white people perspective.” Rather than feeling immersed in the scene, the viewer is looking at it as if from across the street or from the warmth and safety of his or her passing car. I have a small hope that this Christmas image will come to mind when we see other “down and out” people huddling outside of gas stations, reminding us that our Savior’s parents (and indeed, Jesus himself) were at one time similarly troubled.