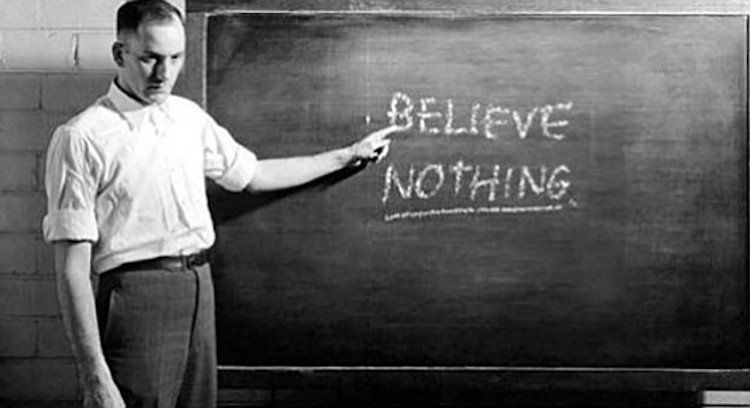 I heard a conversation recently about the knowability of virtue, and it put into crystal-clear perspective the chasm that exists between Christian faith and the relativism of our age. In the conversation, one person said, “I believe truth is knowable and certain such as the existence of absolute virtues.” The other person said, “It really depends on who you ask.” Relative. Unknowable. Dependent.

Allen Bloom, author of The Closing of the American Mind, similarly asserts that a prevailing view of students in academic institutions is that values are relative. Bloom also warns that this philosophy is catastrophic—not only for the university but also for liberal democratic society.

At the heart of this relativistic belief system is the philosophy of Nihilism – meaning nothingness and emptiness.  The implications of Nihilism are frightening yet we have seen them unfold on the evening news with the January 6 insurrection and other similar events.  They are:

Christian faith is absolutely opposed to Nihilism, yet imagine how Christians could unknowingly yield to nihilistic thought by having no hope or optimism about the future, by embracing or using power as a means to force compliance to their system of thought, and by endorsing people who live and act in ways that are 180 degrees away from the life to which Jesus calls us.  Nihilism sees no purpose or value in helping others because that would be seen as weak or stupid.

If nihilism was true, what basis or reason would Christians have for loving our neighbors, living lives of honesty and integrity, and believing that history is moving toward redemption?  Christians must not be naive about the direction of American thought.  It leads to pointlessness and absence of meaning.  It makes the death of Christ nothing.