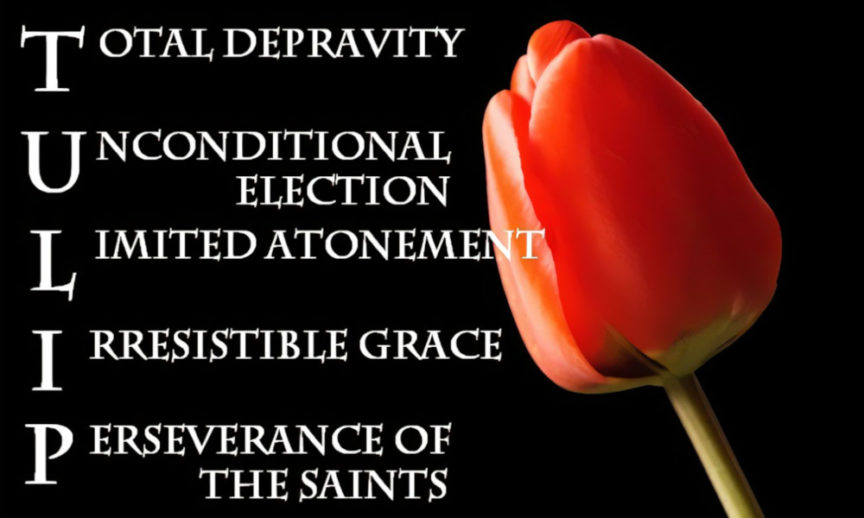 The doctrine of Calvinism was first given shape and expression by John Calvin in the 1500’s and was later formalized by the Council of Dort in 1618-1619.  This article briefly explains the five major ideas of the doctrine.  Calvinism is popularly summarized in the synonym T.U.L.I.P.

Total Depravity.  This means that mankind is totally sinful in every respect of her/himself so that s/he cannot make any effort to appropriate salvation.  This idea must be compared to the several places in Scripture where we are exhorted to make decisions which lead us closer to God and to obey God.  Human initiative and accountability are legitimate ideas in the Bible.

Limited Atonement.  This idea says that Jesus’ death is limited in its scope, i.e., he died only for those elected to be saved.  However, passages such as 1 John 2:2 state otherwise.  He himself is the sacrifice that atones for our sins–and no only our sins but the sins of the world.”  1 John 2:2.

Irresistible Grace:  Calvinism states that when God decides that he’s going to save you, you have no choice in the matter.  In Acts 7:51 Stephen confronted his critics and said, “You stubborn people…Must you forever resist the Holy Spirit?”  In saying this Stephen gives assent to the idea of the human will and its ability to say no to God’s initiative.  Grace can be resisted.

Perseverance of the Saints:  This idea says that once God has predestined and saved you, it is impossible to lose that state.  Yet the New Testament is replete with references to the idea that one can, in fact, jeopardize salvation.  For example, Paul spoke of his continual self-discipline in order to avoid being “disqualified,” 1 Corinthians 9:27.  The Hebrews writer warned about apostasy in Hebrews 6:4-6.  Apostasy is a departure from a state of being saved.  These passages warn against losing one’s saved relationship with God.