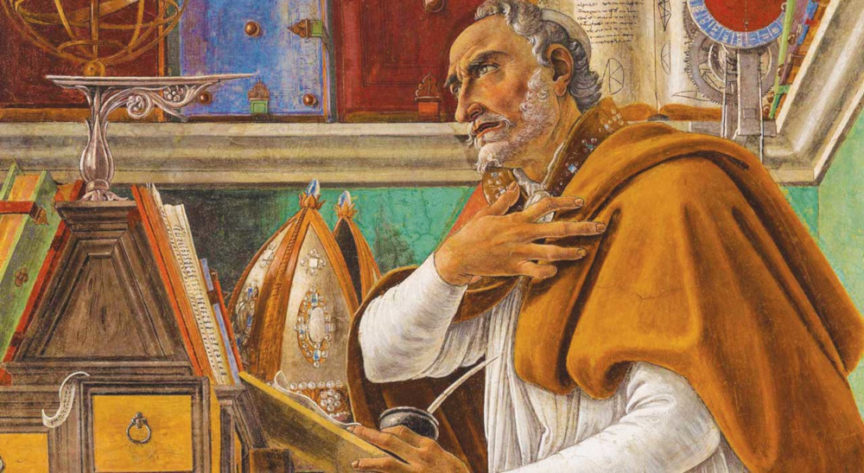 This post is from Pete Enns. The Bible for Normal People. https://thebiblefornormalpeople.com/fall-augustine-really-screw-everything/

“Following up on my last post, 5 Old Testament Reasons Why Original Sin Doesn’t Work, let’s reflect on a 2015 article that caught my eye (thank you, Facebook feed) by Orthodox theologian (and walking thesaurus) David Bentley Hart.

The article is called “Traditio Deformis,” and in it Hart explains in no uncertain terms, and with his usual wit and punch, that St. Augustine of Hippo (354-430) really screwed up our understanding of the story of the “fall” of Adam (Genesis 3) because he absolutely screwed up what Paul was saying about Adam in Romans 5:12-21.

And let there be no mistake: the doctrine of the Fall, as it is understood by many (but not all) Christians, is absolutely dependent on this one passage filtered to us through Augustine’s understanding of Paul, and remains a view usually championed in the Reformed tradition (especially neo-Calvinism; and hence Hart’s title, “Deformed Tradition”) and middle-of-the-road American Evangelicalism and Fundamentalism.

It’s clear Hart really doesn’t like Calvinism—not one bit. I don’t have the same amount of bile in my throat for Calvinism as does Hart—it is a broad tradition, after all, and the “hyper-Calvinists” (aka, Fundamentalist wolves in Calvinist-sheep’s clothing) are just one flavor.

But speaking as a biblical scholar with no small interest in Paul and Adam [click here or blog categories here and here], I do most definitely share Hart’s assessment of how Augustine’s handling of Paul’s reading of the Adam story and other portions of Romans have left us with an unhelpful—an unPauline—theological legacy.

You should read the article, of course, and Hart goes in some interesting directions that I won’t engage here. But as for me, the three issues Hart raises that resonate most with me about mistaken readings of Paul rooted in Augustine and perpetuated in western Christianity are the following

2. Romans 5:12
Romans 5:12, translated properly (as in the NRSV and other translations), says: “Therefore, just as sin came into the world through one man, and death came through sin, and so death spread to all because all have sinned—“

The “one man” is, of course, Adam. And Paul seems to be saying, quite clearly in fact, that death spread because all have sinned. Now what that means exactly needs some clarification, but that isn’t the issue here. The issue is that Augustine, working from a poor Latin translation of Romans 5:12, has “in him” where the Greek has “because.”

This bad reading of Romans 5:12, rooted in a bad Latin translation of the Greek, has led to the notion that all humans are culpable (guilty) with Adam for what Adam did—all humanity sinned in him.

Augustine’s reading is what many Christians believe Paul actually said, and which is why Augustine’s notion of “original sin” is defended with such uncompromising vehemence as the “biblical” teaching. But neither Romans nor Genesis or the Old Testament supports the idea.

2. Augustine—and those who have followed him—do not seem to understand that when Paul refers to “works” he is referring to the Law of Moses and not to a general “human effort to please God” or some such thing.
When Paul contrasts “works” and “faith” he is not saying, “You are such vile creatures that there is nothing you can do to please God—so works are worthless. Stop trying to earn your way into heaven. Have faith instead.”

As odd as it may seem to some readers, Romans doesn’t address this either/or and very individualistic (see below) topic. Rather Paul’s focus is the Law of Moses and its function of setting apart the people of God (Jews) from Gentiles (Greeks and Romans).

Actually, in Romans, Paul seems to have two specific Mosaic laws in mind: circumcision and dietary laws (see Genesis 17 and Leviticus11). These laws served at the time as “boundary markers” for Jews to identify them as a people faithful to the covenant amid a pagan culture (not unlike how the Amish mark themselves off from modern culture).

Paul is arguing in Romans that what marks off the people of God amid the pagan culture isn’t these particular segments of the Mosaic Law, however cherished and biblical they were, but “faith” in Jesus (which is rooted in the “faithfulness” of God for sending Jesus and Jesus’s “faithfulness” for going through with the crucifixion.)

Why am I getting all into this? Because Paul’s central concern in Romans isn’t “Here’s how you go to heaven.” And thus the entire “works vs. faith” model many Christians work with and assume is as clear as the sun at noon is right off the table.

But Paul’s central concern is really a question: “Who constitutes the people of God?” Paul’s answer (if I may paraphrase):

“Jews and Gentiles together, on equal footing, united in and marked off by not by observing circumcision and dietary restrictions, but by their common faith that Jesus is God’s final answer to how all the world will be reconciled—and that is why you have to get along and love each other. All of you, Jew and Gentile together, are the new ‘people of God’” (see Romans 13-15).

If you get “works” wrong in Romans, you get the whole book wrong. It feeds into the notion that Romans is a “salvation” tract, which is a reading where “original sin” plays a central role. But these are questions Romans was not written to answer.

We know that all things work together for good for those who love God, who are called according to his purpose. For those whom he foreknew he also predestined to be conformed to the image of his Son, in order that he might be the firstborn within a large family.

Who are the “those” Paul is referring to? Individuals who happen to have a conversion experience, invite Jesus into their heart, convert to Christianity?

Or does it refer to the shocking truth, now revealed, as Paul claims, by God through him, that Gentiles now are in Christ and therefore every bit as “elect” in God’s mind as Israel?

In fact, as Paul goes to great lengths to argue in chapter 9, maybe this full and equal inclusion of Gentiles was God’s plan all along—not a last minute change of plans, but what he had decided and known (foreknew, predestined) long ago, even as Israel’s story was unfolding from the days of Abraham?

That is the point of those supposed “election of individuals” prooftexts in chapter 9: they are about Gentile inclusion into the family of Abraham is God’s plan from of old. Of course, Gentiles are made up of individuals, but again, that is not the argument Paul is making. He signals as much in 9:6-7 (where he says that “children of Abraham” does not equal “Jews” but Gentiles, too).

OK, well. . .whenever I open my mouth about Romans it’s hard to shut it again. This post is more involved than I’d like it to be, but Romans does that to you.

Let me bring this to a close.

Reading Romans through Augustine’s eyes obscures more than illuminates the letter. The consequences are huge, including,

how we discuss evolution
the role of “good works” in the Christian life
the relationship between Christianity and Judaism
the nature of the human condition
what exactly “salvation” means
and much more.
Hart’s article is a good one. Hope you have a chance to read it.”