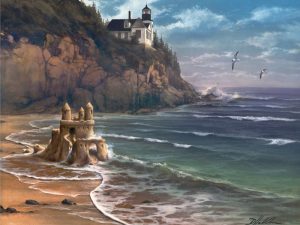 24 “Anyone who listens to my teaching and follows it is wise, like a person who builds a house on solid rock. 25 Though the rain comes in torrents and the floodwaters rise and the winds beat against that house, it won’t collapse because it is built on bedrock.

26 But anyone who hears my teaching and doesn’t obey it is foolish, like a person who builds a house on sand. 27 When the rains and floods come and the winds beat against that house, it will collapse with a mighty crash.”

28 When Jesus had finished saying these things, the crowds were amazed at his teaching.

I spent many years preaching in traditional churches, and, in most cases, I did not see a message of expectation and accountability being given by church leaders.  In other words, the prevailing idea seemed to be one of maintenance – keeping the church going through its programming, contributions, and social relationships.  Never did I hear members being called to the rigorous discipleship to which Jesus called them.  Rarely also was the “light bulb on” realization by individuals that the risen Christ has an expectation of sacrifice and commitment for his followers.

At the conclusion of the Sermon on the Mount, Jesus concludes with what I’d call a “come to Jesus” talk with his listeners.  “There are two kinds of people in this audience – those who will listen and take me seriously, and those who will nod their heads in agreement and then go back to life as usual.  Which one will you be?”  Indeed, which will YOU be?

The outcomes of the two kinds of people-response are equally clear.  The people who take Jesus seriously are like a house whose foundation is rock solid.  Nothing can compromise or shake such a foundation.  That is a comment about the rock-solid, dependable, and truthful word of Christ.   The other response produces a similar outcome to that of a person who elects to build a house on sand, subject to wind and erosion which eventually causes the destruction of the house.

Jesus warned people about the cost of following him, but some people didn’t listen to his caveats.  Peter denied knowing Jesus.  Judas betrayed Jesus to the Roman authorities.  Ananias and Sapphira lied.  Peter had to come to terms with Jesus’ inclusive love of the Gentiles.  The list goes on.  We all eventually love something too much and have to decide which it will be – Jesus or the world.

Being a Jesus-follower is costly, but following Jesus is like building a brick-solid house with a strong foundation.  It’s the only kind of construction you permit.

Dear God.  We know that you don’t do shoddy work.  Nor do you want your people to do so.  Enduring, permanent building is the only kind your construction company does.  So we pray that you keep of reminded that we’re not building temporary shelter, but rather a home that can weather any storm that life brings.  Help us to be obedient people who commit our lives thoroughly to you.  In Jesus’ name we pray this.  Amen.