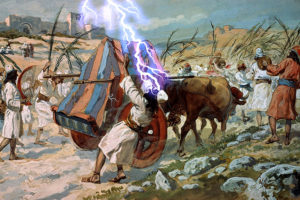 Monday, July 5. Read Psalm 15. 1) This is an entrance Psalm, commonly thought to be what ancient Jews would sing before going into the temple/before God. What is the primary concern of this Psalm? 2) What sort of person can have access to God’s presence?

Tuesday, July 6. Read 2 Samuel 6:1-15. 1) What is the setting for this text? 2) What happened that might be construed to show the attitude which we should have to go before God?

Wednesday, July 7. Read Exodus 3:1-15. 1) What happens to Moses in this text? 2) What does God require of Moses that might speak to the attitude worshipers should have? 3) What does God tell Moses about himself?

Thursday, July 8. Read 2 Samuel 6:1-11. 1) Why did David take 30,000 troops to Baalah of Judah? 2) What did the people in David’s company do? What did it show about what they thought about their responsibility? 3) Why do you think God became angry against Uzzah. 4) What did David consequently come to feel about continuing with the Ark of the Lord?

Friday, July 9. Read Psalm 15. 1) What is this Psalm asking for an answer to? 2) Why (your opinion) should we not assume we know this? 3) Describe the qualities of a person who can come before God?

Dear Father, like a big parade route we line the streets with our children sitting on our shoulders as we wait for you to process on the biggest float. Trumpets announcing. Dancers dancing. Incense wafting down the way. We want to be ready for this occasion. Not distracted. Attentive to the sort of people we are and whether we give you pride. Please help us to be ready for this great moment. With clean hands lifted high in praise of you. In Jesus’ name we pray this. Amen.

Before Jehovah’s Awful Throne
By Isaac Watts, 1705
(In this hymn, “Awful” means full of awe not “terrible” as it is commonly used today.)

Before Jehovah’s awful throne,
ye nations, bow with sacred joy;
know that the Lord is God alone:
he can create, and he destroy.

His sovereign power, without our aid,
made us of clay, and formed us then;
and, when like wandering sheep we strayed,
he brought us to his fold again.

We’ll crowd thy gates with thankful songs,
high as the heavens our voices raise;
and earth, with her ten thousand tongues,
shall fill thy courts with sounding praise.

Wide as the world is thy command,
vast as eternity thy love;
firm as a rock thy truth must stand,
when rolling years shall cease to move.

Devotional Article of the Week

The Holiness of God
by The Bible Project

God’s holiness is His defining characteristic. The holiness of God is a term used in the Bible to describe both His goodness and His power. It is completely unique, and utterly all-powerful, radiating out from God like an energy. In fact, God’s holiness is so overwhelming, that it can actually be dangerous to approach.

It’s helpful to think of God like the sun. The sun is so bright and powerful that its energy radiates out through the solar system. It’s a good, helpful thing to be within the sun’s energy, but the sun itself is so powerful that it’s dangerous to get too close. In scripture, where we see examples of mortal men approaching the presence of the almighty God, the exact same scenario that this metaphor depicts is played out.

Take, for example, the story of Moses and the burning bush. As Moses approaches the burning bush (which as we know is the presence of God), God tells Moses to take off his shoes because he is on holy ground and warns him not to come any closer.

It’s an intense example of just how overwhelmingly powerful God’s holiness is. Other examples of God’s holiness in the Bible can be found in verses depicting the Holy of Holies, the inner room of the Israelite temple where God Himself resided. Because the Israelites, and especially the priests that worked within the temple, were in such close proximity to God’s holiness, they had to take great care in order to keep themselves pure.

For the Israelites, keeping oneself pure involved not only trying to remain morally pure but also ritually pure as well. The rituals that the Israelites had to follow in order to stay pure were numerous and included things such as staying away from dead animals, certain foods, and certain bodily fluids. While becoming ritually impure was never defined as being sinful, the problem was that the Israelites were not able to exist within such close proximity of God’s holiness if they were ritually impure.

Later on in the Bible, we see incredible stories of God’s holiness expanding out from the temple and purifying things that were otherwise impure. Isaiah, for example, has a vision where he enters the temple impure but is purified while he is there by a burning coal – a physical embodiment of God’s holiness. Later on, Ezekiel also has a vision where the holiness of God pours out from the temple like a river, revitalizing and purifying all the land it comes into contact with.