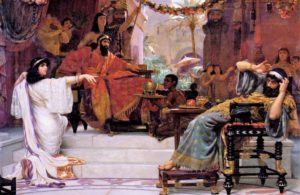 This is the weekly devotional for the week of 9/19-9/26. On Sunday the 26th Bev and I will be in Nashville, and we will be worshipping at the Otter Creek Church in Brentwood. This week’s devotional is not in its usual form. Still, I want to give you something to “chew on” for the week.

Text for the Week:

Esther is the story of a young Jewish girl, living in Persia during the days of King Xerxes I. In the story, Esther got swept up in a strategy to find a new queen for Xerxes. If you read between the lines, you hear the story of sanctioned rape, the story of a king who brings young virgins into his court to be wined and dined and turned into property for his courtyard. After a year of the best foods, beauty treatments, and favored treatment, Xerxes found his queen. Esther.

Esther 2:15-18. “…the king loved Esther more than all the other women of all the virgins she won his favor and devotion so that he set the royal crown on her head and made her queen…Then the king gave a great banquet to all his officials and minister–“Esther’s banquet.” He also granted a holiday to the provinces, and gave gifts with royal liberality.”

Esther’s position in the Kingdom gave her an opportunity to expose a plot against her people, the Jews. The big idea in the book is that of taking every opportunity to serve God.

God moves in a mysterious way
His wonders to perform.
He plants his footsteps in the sea
And rides upon the storm.

You fearful saints, fresh courage take;
The clouds you so much dread
Are big with mercy and shall break
In blessings on your head.

His purposes will ripen fast,
Unfolding ev’ry hour.
The bud may have a bitter taste,
But sweet will be the flow’r.

Blind unbelief is sure to err
And scan his work in vain.
God is his own interpreter,
And he will make it plain.

For Such a Time as This!
Is this your time?
by Phil Ware

Just saying the phrase, “for such a time as this,” reminds many of us of a story. The phrase was said to Queen Esther by her foster dad, Mordecai. He was asking her to risk her life and go before the King without an invitation. The need was great and the concern was urgent. An evil leader in the land had arranged to have God’s people murdered throughout the empire. If Esther didn’t intervene, God’s people would be slaughtered with the support of the government. Bottom line, the Holocaust would have happened more than 2,000 years earlier at the hands of the Persians.

Esther accepted her role in history. At great risk, she went before the King, who gladly welcomed her. Through the work of God, of Esther’s cleverness as well as beauty, and of her position in the palace, the evil man was eliminated, Mordecai was praised, and God’s people were saved. Esther recognized that God had brought her to her important position “for such a time as this” (Esther 4:12-16).

But, what if this phrase, “for such a time as this,” is not just about Esther? What if it is a challenge to each of us — you and me — personally? What if we were purposed by God to live in just this time? After all, wasn’t this story recorded in Scripture to be one of our stories — to help remind us of who we are?

There are basically two choices to understand why we are here.

We are here by accident — we are nothing more than a random combination of genetic material with no real purpose other than to live out our random fates.

We are here by God’s plan — we are put here intentionally to live out his purpose in our lives.
If we choose the second, then where we live, who we are, what we have, and how we use those things are all eternally important. We realize that we are put in the position in which we find ourselves “for such a time as this”!

As I was talking with a friend who is far wiser about money and investing than myself, I was verbalizing my concern about all the debt we are accumulating and that our kids and grandkids are going to have to pay for all of our responsibilities. This friend suggested that the incredible wealth we have enjoyed in the Western world over the last 80 years or so could be an anomaly — not something we should assume will continue to last for generations and generations. He then said, “It’s not about passing on our wealth to our kids and grandkids, but about what we do now with what we have received to advance the Kingdom of God.”

This was a powerful wake-up call for me. I knew he was correct in his statement. Yet so many of us have been pre-occupied — and some overwhelmed — with the downturn in the economy. We have lost sight of all of our tremendous blessings. Having so much is not enough for us.

There are understandable reasons for this. Some of it has to do with our human hearts always wanting more. However, there is also another issue. The brightest minds, the best video, and the most creative work in our culture is done to help us realize what we lack — this is the work of advertisements. We are bombarded with messages manipulating us to want to get new and better versions of what we already have and to acquire the many things we think we lack.

James Bryan Smith in his book The Good and Beautiful God, tells a powerfully convicting story about a birthday party for a young child. This little girl was not pleased with any of the gifts she was opening. As she tore into them, she cast them aside because none was the gift she wanted most. All the parents were mortified, the children giving gifts were disappointed, and the parents of the child were embarrassed. As Mr. Smith sat there thinking about the situation, the Holy Spirit convicted him that he was that child — that he focused more on what he lacked than on all that God had so richly blessed him to have. As I read this chapter, I was convicted as well.

We are incredibly blessed, yet we often focus more on what we lack than on how we can use what we have to advance the Kingdom of God. We have not realized that God has put us in the position in which we find ourselves — understanding English which is the new world language, living in a time where we can travel quickly, communicating globally in unparalleled ways via the computer and cell phone, and having the freedom to do these things in the name of Jesus.

Who knows, but that we have come to our position for such a time as this!