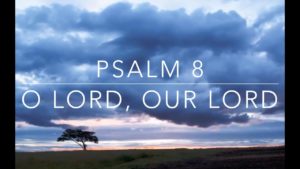 This week’s devotional is meant to set the stage for Monika’s sermon on October 3, entitled “Who are you?”

Included in this brief devotional is this link to a choir singing the iconic hymn, “O Lord our Lord” – about 2 minutes long.

This is a great Psalm, and Monika will help everyone to think about the joys of God and God’s creation.

O Lord, our Lord, your majestic name fills the earth!
Your glory is higher than the heavens.
2 You have taught children and infants
to tell of your strength,
silencing your enemies
and all who oppose you.

3 When I look at the night sky and see the work of your fingers—
the moon and the stars you set in place—
4 what are mere mortals that you should think about them,
human beings that you should care for them?
5 Yet you made them only a little lower than God
and crowned them with glory and honor.
6 You gave them charge of everything you made,
putting all things under their authority—
7 the flocks and the herds
and all the wild animals,
8 the birds in the sky, the fish in the sea,
and everything that swims the ocean currents.

9 O Lord, our Lord, your majestic name fills the earth!

When I consider your heavens, the work of your fingers, the moon and the stars, which you have set in place, what is man that you are mindful of him… ? –Psalm 8:3-4a

Imagine the scene. Here is young David out under the stars at night watching his sheep. The air at that time and place was not darkened with smog or polluted with the irritants that fill the atmosphere today. The stars were brilliant, and the moon, in its full phase, was crossing the heavens. He felt, as we have all felt as we have stood under the stars at night, something of mingled mystery and awe as he looked up into the star-spangled heavens. He considered the beauty of nature and its silent witness to the wisdom of God. All the breath-taking beauty of this scene broke upon his eyes as the sun set. He was astonished at the greatness of a God who could create such things.

Thirty centuries after David wrote these words, we feel the same awe when we consider the starry heavens. Astronauts have been physically able to walk on the same moon that David could observe only from a distance, yet all the knowledge that has been gained about the universe in which we live only serves to deepen our impression of the tremendous wisdom and power of God. How vast is the universe in which we live! These billions of galaxies whirl in their silent courses through the deepness of space. How tremendous is the power that sustains it all and keeps it operating as one harmonious unit! That is what impressed this psalmist.

Then he faces the inevitable question that comes to those who contemplate God’s greatness. ‘What is man, he asks, in the sight of a God who could make a universe like this? You will recognize that this is the question that cries for an answer in our day. What are humans? Where did they come from? What is their purpose here? Why do they exist on this small planet in this vast universe? These are the questions that are being asked more and more.

The psalmist goes on to answer his own question: You made him a little lower than the heavenly beings and crowned him with glory and honor (Psalm 8:5). Man has a unique relationship to God. He was made to be a little less than God. What is included in that remarkable expression is the revelation of God’s purpose for man. According to the Bible, God made man to be the expression of God’s life, the human vehicle of the divine life, the means by which the invisible God would be made visible to His creatures. Man was to be the instrument by which God would do His work in the world and the expression of the character and being of God. He is the creature nearest to God. There is none other nearer, for God Himself was to live in man. That is the revelation of the Bible. Man is such a unique being, such a remarkable being, that God Himself intends to live in Him to be the glory of man’s life.

We thank You, Father, that in You we find our true worth and identity.