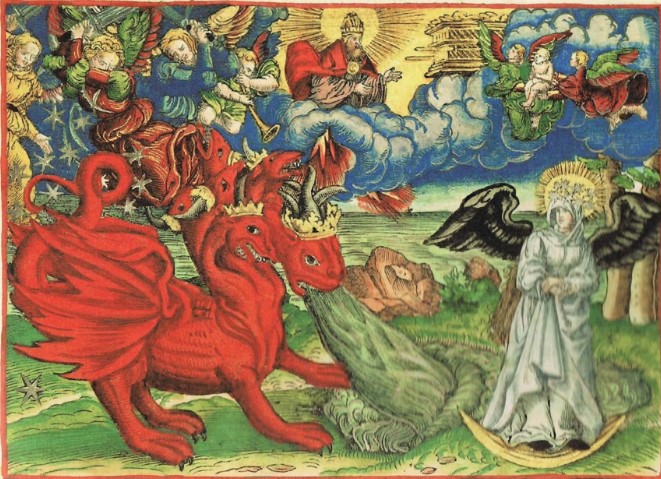 Conflict and Characters: The Drama of Revelation

I like the way that Gorman approaches the organization of Revelation better than Wilcock. So I am changing to Gorman in this lesson.

It is important to know that the Centering Vision of Revelation is the vision of God and the Lamb as seen in Revelation 4 and 5. The importance of these two chapters cannot be overstated, and Gorman writes this:

This is the consistent witness of the New Testament: that the exalted Lord remains the crucified Jesus.” And this one is the ‘true face of God.’ When this witness is neglected or forgotten, trouble follows swiftly… Christians too often want an almighty deity who will rule the universe with power, preferably on their terms, and with force when necessary.”

“We must stress that only when chapters 4 and 5 are read as Revelation’s hermeneutical key to reality, divinity, history, and ethics will we be able to place the vision of judgment in proper perspective.”

The slaughtered Lamb is …. The interpretive lens through which we read the remainder of the book.

Conflict and Characters: The Drama of Revelation:

In the opening chapters of Revelation we have been introduced to the Protagonists of the book (the main character/s). They are:

There are also those who are linked to the Protagonists:

And we have been introduced to the Antagonists:

These opposing forces are engaged in a cosmic conflict – right in the middle of places like Ephesus and Pergamum, not to mention New York or Nairobi. Because of this some have even called Revelation a war scroll. (Like the tapestry in Bayeux, Germany tapestry, 230 feet by 20 inches depicting the conquest of England in 1066 by William the Conqueror.)

Revelation can be looked at as a story or a plot which might be outlined in the following way:

The Plot of Revelation:

I. The Prologue: the Cosmic Stage is Set: God created humankind to live in a state of worship of God, communion with others, and harmony with Creation. Satan (chapter 12) pursued Messiah who God sent to humankind. But Satan, cast down from heaven, continues to pursue God’s people.
II. Act One: Satan is on the Move: Satan is directing the powerful idolatrous culture of death. In Satan’s employ are two key figures:
a. The beast from the land
b. And the beast from the sea (ch. 13).
c. This unholy trinity constantly pursues the faithful people of God, seeking to win their allegiance and worship.
III. Act Three: God Judges.
a. The powerful culture of death, Babylon, is under divine judgment and doomed to fall (chps 17-18).
b. God and the Lamb begin the judgment now (much of chapters 6-20) resulting in the swift and certain demise of the unholy trinity.
c. This is the longest act in Revelation, consisting of multiple scenes.
d. It can be summarized in a few words, “Fallen, fallen is Babylon the great” (Acts 18:2).
e. God defeats the unholy trinity as well as death itself (20:14).
IV. Act Four: God Renews
a. Babylon is replaced by the new Jerusalem, the new heaven and earth, the new culture of wholeness and life (chps 21-22).
b. Sorrow and pain are absent. Oppression and death ae gone.
c. Healing of the nations begins.
d. Humanity is restored to God’s original intentions for worship, communion, and harmony.
e. God and the Lamb dwell permanently with a renewed humanity.
The Chief Characters of the Drama:

Since we’ve already talked about the Protagonists, we will spend less time on them and more time on Satan. These constitute the chief characters in the Revelation drama.

God, the Lamb, and the Spirit (the God of Revelation is Trinitarian). See Revelation 1:4b-5:

The two most important are a) the slaughtered Lamb which centers our attention on Christ’s death, and 2) Alpha and Omega which identifies him with God and what God is doing in the world. There is more said about the Lamb as well.

Evil Personified: The Unholy Trinity and the Harlot: These characters are developed in some detail in Revelation 12 and 13: Chapter 12 the central conflict in cosmic perspective and Chapter 13 in political perspective. Chapters 17-18 presents the system as a harlot, or whore, doomed for destruction. These beasts and Babylon can be and have been, presented in multiple times, places, and modes.

The beast from the seal is a kind of incarnation of the Satanic power of persecution, deception, and idolatry, also having 7 heads and ten horns (13:1) The actual source of its power is the dragon. The beast’s resurrection-like recovery from a mortal wound is probably an allusion to stories about the return of Nero. It commands international worship and persecutes the church (13:7-9) as one would expect of Satan’s offspring. Its special number is 666, and it has been called the “antichrist” although this name is absent from Revelation.

The second beast, from the land, functions primarily to promote the worship of the first beast (13:12). It operates with borrowed power. It has a lamb-like appearance which is a mask for Satanic speech (13:11), and its public display of signs is really smoke and mirrors to deceive people into worshiping the first beast. It requires elites and non-elites alike to receive the mark of the beast to participate in the economy (13:16-17).

Most interpreters of Revelation would identify the first beast from the sea as the Roman Empire, the emperor, or imperial power. The second beast from the earth is then seen as those who promote the imperial cult, local government, and/or religious officials in and around cities like Ephesus and Pergamum. The mark of the beast might be an imperial slogan, seal, or image.

The history of the interpretation of the antichrist is long and fascinating. Antichrist has been identified as various popes, Napoleon, Hitler, Stalin, John F. Kennedy, and Pope John Paul II. The discussion has tended toward anti-Catholicism and many of the proposals are ludicrous and rise from misguided interpretations.

The identifications from the first century make perfect sense and speak of theopolitical megalomania and collaboration between political power and religious sanction. Civil religion CLAIMS to represent God and God’s will.

Eugene Boring writes, “The beast is not merely Rome….It is the inhuman, anti-human arrogance of empire that comes in Rome, but is not limited to Rome. All who support the cultural religion, in or out of the church, are agents of the beast. All propaganda that entices humanity to idolize human empire is an expression of this beastly power.

The function of propaganda is to make evil look good, the economic divine, violence like peace-making, tyranny, and oppression like liberation. It makes blind, unquestioning allegiance appear to be freely chosen, religiously appropriate devotion. The grand lie does not appear to start as deception, but only as a rhetorical exaggeration. The exaggeration deepens, lengthens, and broadens in an almost organic act of self-distortion.

Candidates over the centuries have included Hitler, Henry Kissinger, Bill Clinton, and Barak Obama. Also John Kennedy etc. The majority of scholars today believe that 666 was a reference to the emperor Nero.

Conclusions point to the likelihood that 666 an imperial figure who in a very ungodly way pretends to be God. We should NOT be searching for specific individuals who could be associated with this number, but rather political powers that claim divine or quasi-divine status or who demand unquestioning allegiance.

She has fornicated with the inhabitants of the earth and become drunk with the blood of the saints. She has 10 client kings in her grip who will make war on the Lamb but also turn on her (17:12-17).

Bruce Metzger writes, “Babylon is allegorical of the idolatry that any nation commits when it elevates material abundance, military prowess, technological sophistication, imperial grandeur, racial pride, and another other glorification of the creature over the Creator…The message of the book of Revelation concerns…God’s judgments not only of persons, but also of nations and, in fact, of all principalities and powers—which is to say, all authorities, corporations, institutions, structures, bureaucracies and the like.”

The Church/the People of God:

The faithful testimony of these witnesses caused them to share the fate of their faithful Lord – both death and resurrection. Peterson says, “The place of worship is protected, but the place of the witnesses is not. Witness takes place in the face of hostility. The witness may be a hero to Christians, but in the world the witness is solitary, suspect, ignored, and occasionally abused.”

The calling to be a witness is difficult and dangerous, but it carries with it the promise of God’s protection in the present and God’s reward in the future. This protection is symbolized in Revelation by the ancient practice of sealing (7:3-9:4). Contrast with the antithetical marks/seals of the beast in 13:16-17; 14:9, 11; 16:2; 19:20; 20:4) does not mean that the church avoids temptation and tribulation but that it is protected from defeat by the inevitable realities. That is, it is, and will be victorious.

In 7:9-17 we are given a vision of the church in heaven. An innumerable, multinational multitude, robed in white, who acclaim the salvation of God and the Lamb. These have come out of the great ordeal (7:14) and already experience some of the blessings of the end times, later portrayed in Revelation 21,22.

Some interpreters understand the 144,000 to be only the martyrs who have died in the tribulation, but it is more likely that each group ** represents the whole church. In any case, the images conveny two crucial dimensions of the church: 1) international/multicultural and 2) in the reward it receives for faithful witness.

The vision of a great multitude that no one could count, should be at the heart of the church’s self-understanding. This is what God is up to in the world.

Two visions of the church: a multinational body, singing and worshiping together AND a body that works for peace and justice among the nations. Gorman says, “Unfortunately, Christians have often been attracted to one or the other of these essential marks of the church rather than all of them together….” And “Participating in the mission Dei did not, and does not, accord well with cafeteria-style Christianity.” And “It is difficult to understand how a church that takes Revelation 7 seriously could tolerate, must less promote, any form of nationalism as is being proposed today.

Gorman notes some things that the modern-day church is lacking. 1) an adequate global theology of the church and also knowledge of and devotion to the church’s heroes and martyrs. In the absence of this people often turn to national/political heroes.

Revelation narrates the divine drama and calls the Christian church to have a part in the drama. It is the part of the faithful witness, or active pacifism even in the face of an evil empire. This role is startling, full of paradoxes and surprises.

The Nations and Their Inhabitants: The faithful are not the only humans on the stage of cosmic and political conflict. The word “nations” appears 19 times in Revelation. These are various groups of individuals: collaborators with political power, and victims such as slaves.

The final judgment depicted in 19:18-21 is not good for the fornicating kings of the earth and even the average people of the earth (20:12-15; 21:8), maybe even thinking they are among the faithful.

Conclusion of the Topic:

How do you think Revelation can be read today, given our specific problems, villains, etc?