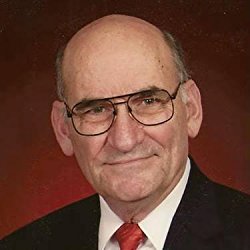 Bev Logue has known Dale Smith since childhood and her attendance at Wisconsin Christian Youth Camp.  Dale was a regular at that camp in the early days of its existence.  And a family favorite.  Bruce has known Dale for a shorter period of time, but has equal regard for Dale.  He now cares for a wife of many years who is suffering from dementia.  In Bruce’s opinion, a great example of what love looks like.  Enjoy this reverie from Dale.

I had sorta whacked my left thumb with the half-brick I was usin’ to crack black walnuts.

It was 1937. I was five years old, and I guess Dad thought my howling and carrying on was a tad outta proportion to how bad the injury was.

He seem to be of the opinion that I was mostly imagining that it was all that bad and that I oughta shrink down all that imagining.

Hmmph! It wasn’t his thumb that was throbbin’ and glowin’!

But I guess he was a good one to learn from. Cause he musta been a real world-champion ‘zaggerator back when I was a little guy of just two or three.

Made quite an impression on me when he dropped a timber on his foot and he started jumpin’ around and using ‘zaggerating language all over the place. And loud, too!

Mama put her fists on her side with her elbows sticking straight out and said, “John Orville Smith,” –that’s his full name, but she usually just called him “Orville” or “Honey.”– But this time she said, “John Orville Smith, I’m not gonna put up with you carryin’ on like that and talkin’ like that! Not for a minute, ‘specially in front of the young’uns! And I don’t wanna to hear it, and neither does the Lord! You gotta learn to control yourself!”

My daddy, right then, wilted before our eyes—sorta like Tinkle, our old dog did when you scolded him. Dad shook his head and soft-and-sad-like said, “Ethel, Honey, I’m sorry.”

He musta been, ‘cause, he sure doesn’t talk like that these days. I don’t either. I did say, “heck” one time, but Mama said, “Now Daleboy, don’t you start that!” So that ended my career as a cusser.

Now, Dad was teaching me that I didn’t need to ‘zaggerate that I was in such agony and that my thumb was probly gonna drop off and I’d go through life left-thumbless.

He said, “Son when bad things happen, you can carry on about them like they’re the awfullest thing that ever happened and blow ‘em up so big you couldn’t stuff ‘em in the corncrib. Or you can say to yourself, “Boy, that hurts, but I’m strong enough to handle it!” That way you can shrink it down to where it’ll fit in a thimble and you can stick it in your pocket. It’s up to you.”

I thought about it and realized that ole thumb didn’t hurt so much, after all. ‘Specially since it was warm and wet in my mouth. My right thumb and forefinger had wrapped around it and hugged it tightly and had poked it in my mouth.

Then, for a five-year-old, I did some powerful thinkin’ about the importance of ‘zaggeratin’ some stuff and shrinkin’ some other stuff.

Maybe I’ll tell you more about that next time.

P.S. A hammer is better than half a brick for crackin’ walnuts.