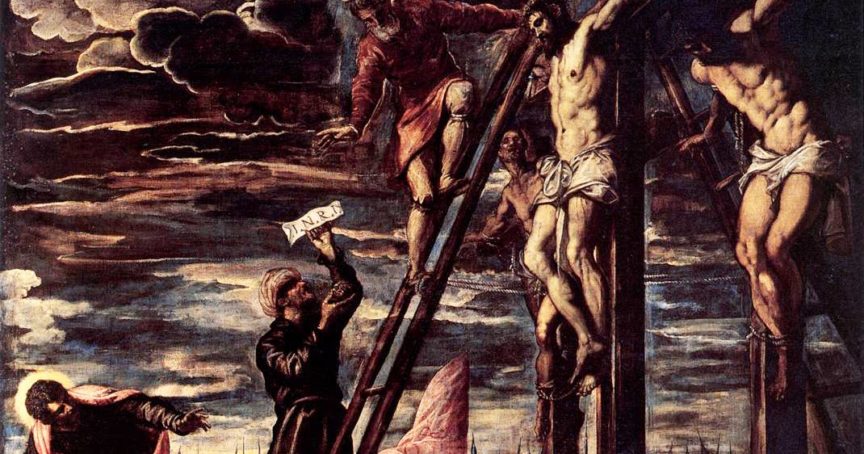 Elie Wiesel (1928 – 2016) was a Romanian-born American writer, professor, political activist, Nobel laureate, and Holocaust survivor. He authored 57 books, including Night, a work based on his experiences as a Jewish prisoner in the Auschwitz and Buchenwald concentration camps.

In Night there is the description of the SS hanging of two Jewish men and a boy on a gallows in front of the assembled inhabitants of Auschwitz.

The men died quickly but the death struggle of the boy lasted half an hour because of his light weight.  “Where is God?  Where is he!” a man behind me asked.  I heard a voice within me answer, “Here he is—he is hanging here on these gallows.”

But as it happened, Jesus “endured the cross, despising its shame,” Hebrews 12:2, and by so doing he bound himself to us.  So, we see Jesus daily in the hurting, suffering, lost, alienated, and shamed.  We see Jesus, not standing over us in authority but kneeling with us in compassion and service.

And we identify our lives with Jesus’ life every time we minister to one another, call each other on the phone to say, “I was just praying for you,” generously ask, “how can I carry some of your load,” or even say, “I’m struggling; will you help me through this.”

At the time of this writing, we are watching Russian forces invading a peaceful nation to take possession of it.  We hear stories of families split apart, little children dying, and houses destroyed, all for one man’s lust for power.  It’s not unlike the Roman treatment of the Jews, crucifying them on the road leading in and out of major cities.

“Where is God,” we may ask.  God is standing next to the grieving mother.  Or the father bidding goodbye to his family as they leave for safety.  Lent takes us to Jesus’ wilderness suffering and also to the bedside of Dorcas as widows grieve her death.  God is sharing our suffering with us.

Father to the suffering.  God of the cross.  We turn to you especially in this turmoil in Ukraine.  Innocent people beset by cluster bombs, and heatless building in the middle of Ukraine’s winter.  We turn to you with questions about why despots like Putin are allowed freedom to cause such suffering.  But we also know that your way of working is counterintuitive.  It is through the Cross.  Through showing death it has no power.  Through facing down sin and ending its reign.  For this we give thanks to you.  Amen.