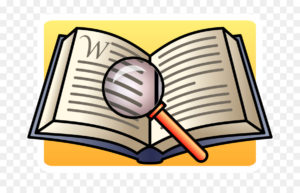 Language is fluid, constantly changing. Some dictionaries publish an annual list of the new words that make it into their updated editions. For example, “selfie” was named word of the year by the Oxford Dictionary in 2013..

In July, MSN posted an article about the new words that Dictionary.com had added to its list of words. These included “long hauler,” minoritize, 5G, domestic terrorism, and even “yeet.” In case you don’t know, “Yeet” is a word meant to show enthusiasm, approval, triumph, pleasure, or joy. There were over 20 new or reinterpreted words added to the online lexicon.

Words are barometers of social change.  They help us to see what is new in the world, like the first time “personal computer” or “cell phone” were used to identify technological advances.  Or when “selfie” became a household word that described the preoccupation of people with taking their own picture, arm outstretched and head cocked up.

In the spiritual realm, it has been interesting to watch the proliferation of new Bible translations.   The old King James Version of the Bible is now so outdated and awkward, very few people would go into a Bible book store to buy a KJV.  The New Living Translation, The Message, and other modern translations are now the best-sellers among Bibles.  You can’t purchase some translations, such as the NRSV,  in a book store because the reading level is too high.  Those you find at Amazon or a seminary book store.

The new translations reflect the same thing that MSN was reporting, namely, a change in the words we use to communicate.

This leads me to a larger idea about the words we use to communicate in general.  There’s a good story in the Old Testament about how our speech can identify or betray us.  In a battle, the army of Gilead occupied one of the crossings of the Jordan River.  On the other side of the crossing was their enemy, the people of Ephraim.  Both peoples spoke Hebrew but there were slight dialectical differences.  In the case of the Judges 12:6 incident, the Gileadites had a password, shibboleth, which means an ear of grain.  But the people of Ephraim didn’t pronounce the “sh” sound and said instead, “sibboleth.”  So if a person trying to cross the Jordan said “SHiboleth,” they knew he was from Gilead, but if he said “SIboleth,” they knew he was from Ephraim and would kill him.

Similarly, if someone’s 2nd person plural pronoun is “y’all,” the chances are very good that person is from the south.  Similarly, one might say, “youse” or “youses” or “you guys” if you’re from the northeast or the west.  There’s an endless collection of words that identify us.  If you’re walking on the Merced Bike Path and hear someone say, “Have a blessed day,” the odds are really good that s/he is an evangelical Christian.  When I tried to get my car registration after moving to Minnesota, I was asked to give my first, middle, and last names.  “Bruce” was pretty easy for the clerk to understand.  When I said “Wayne,” she looked puzzled and ask me to spell it.  “W.  A.” I said.  “I,” she said.  “No, A,” I said.  Drawling my vowels added another layer of complexity to the communication.

What do new words and “shibboleths” have to do with us today?  Good question.

Paul told the Colossae church that they should, “Conduct yourselves wisely toward outsiders….Let your speech always be gracious, seasoned with salt, so that you may know how you ought to answer everyone.”  What he said can be broken down this way.

Language is fluid to be sure.  But the constancy of God’s desire for you is just that.  Constant.  Let’s answer the people around us in a God sort of way.