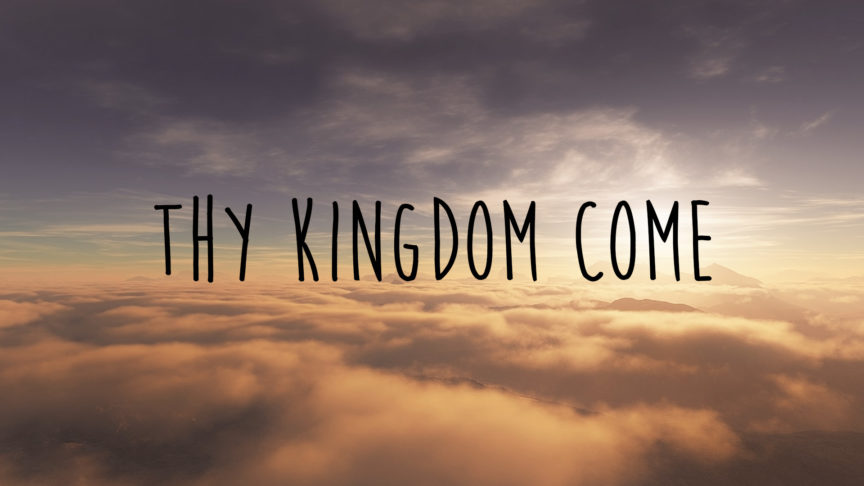 Shortly after his 40-day trial in the Wilderness, Jesus began his ministry in earnest.  Matthew says that Jesus went throughout Galilee “proclaiming good news, curing every disease and sickness, paralysis, epilepsy” and a host of other things.

As his fame spread, so did the crowds, including the crowd that assembled in a place Matthew called a mountain.  There he delivered what is popularly called The Sermon on the Mount, during which Jesus taught the crowds how to pray.

People under the boot of Rome would have perked up when they heard Jesus say this in his prayer.

Maybe this reminded those who had bumped into Jesus before that the Kingdom was a preoccupation of his.  Words about the Kingdom were some of the first to come in his sermons, post wilderness.  Jesus had just been offered alternative kingdoms by Satan.  “No,” Jesus said, “The kingdom of heaven/God has come near.”

Jesus warned against becoming preoccupied about too much attention to worldly matters.  “…. strive first for the kingdom of God and his righteousness, and all these things will be given to you as well,” he said.  Matthew 6:33.

Ultimately, collecting what the world has to offer, soon becomes a god, something the collectors hope will save them.  But ask anybody who has witnessed a stock market crash or a catastrophic tornado or the failure of their bank or the prison sentence of their stocks manager how much trust they then place in the credence of their worldly security, and they will say, “Greatly diminished.”

Jesus warned about this.  “Seek FIRST the kingdom,” he said.  “Everything else falls into its rightful place after that.”

O God, ruler of the cosmos and creator of the Kingdom.  We know that everything that pretends to take the place of You and your gracious rule is a liar.  We have seen this through history:  Hitler, Stalin, the Taliban, and now Putin.  We pray that the truth of what Jesus said about the kingdoms of the world will become increasingly clear.  And may your Kingdom come in all its glory causing the proliferation of your gracious focus soon.  In Jesus’ name.  Amen.