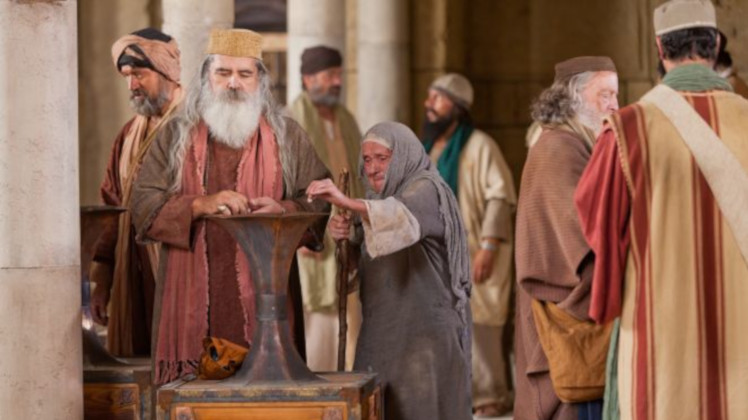 Yesterday, Jesus and his disciples processed into the City.  Like a parade float on Market Street in San Francisco.  Cars stopping.  Honking.  People pointing.  Bystanders thought it might be a local sports team celebrating a victory.  Traffic snarled.  Luke 19:29-40.

Some onlookers thought it was maybe a political candidate announcing candidacy for the upcoming local election.  But you would have needed to see the one-person spectacle up close to understand.  This was different than any political parade you’ve ever seen.  The only entry in the parade was a small horse carrying a single, unimpressive rider surrounded by people who were acting as if he was someone great.  Great, yes.  But not in the way they thought.

That’s the way it goes with Jesus.  Until you get to the front of the noise and spectacle.  Then you discover he has made his way to the Temple where he is sitting near the alms box talking to a small group of hangers-on while watching a poor widow make her way to the box to drop in her last two coins.  All she had.

Jesus was a back-of-the-line person.  He was drawn to people that no one paid any attention to.  He even warned about seeking out the front.  Preeminence.  Attention from others.  The little widow was invisible to the big spenders who dropped large contributions into the contribution box.  Her two coins would barely buy a meal, much less a fancy suit of clothes.  But in Jesus’ world, “the last will be first in the Kingdom of God.”

Jesus’ observation about the widow was not to suggest that poor people should give their last two coins, but rather to look at capacity.  In Jesus’ words, “She gave all.”  To the rich around her, their gifts really cost them nothing.  Pocket change.  A convenient gift.  It was nothing they thought about much, except perhaps how much respect it would buy them.

The widow would have never stopped to think that maybe the guy at the front of the parade was there for her.  She dropped in her coins and shuffled off, through the Temple colonnades and on her way home.

Luke doesn’t say what the response of the disciples was.  Did they even care about what Jesus said?  Luke’s next comment was that the disciples were talking about the beauty of the temple.  If Luke’s silence means anything, it appears that the disciples, at this point, liked a good military parade more so than hanging out with widows who just gave away their last two coins. Luke 21:1-6.

O Lord of the downcast.  Who refuses fame and wealth.  Who chooses, rather, to go to the back of the line with the widows, hated, and disenfranchised people in our world.  Please help us to seek your way and prefer your path.  We know that the way of the cross is not a parade but a spectacle.  Help us.  In Jesus’ name.  Amen.