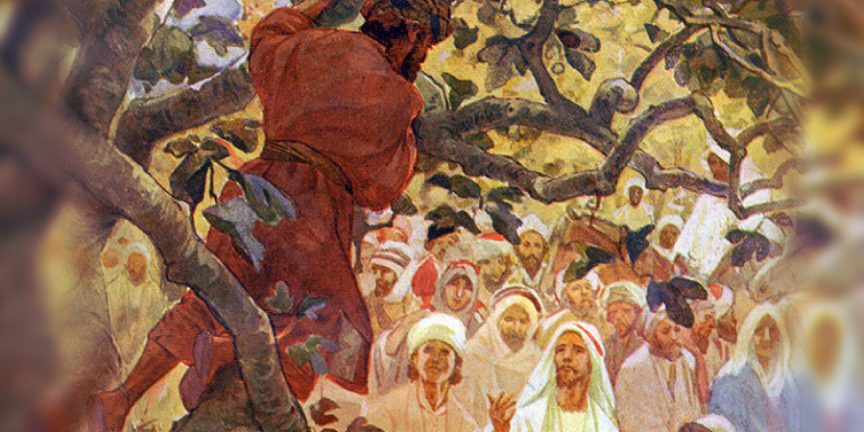 Following Jesus is a difficult proposition. That becomes very clear in the way that Jesus invites people to his Path. And also the way Jesus warns wannabee disciples.  In Jesus’ warning-parables is a king who takes stock of his army before he goes to war and a tower-builder who determines if he has enough money to complete the project.  Jesus also said, “Whoever does not carry his own cross is not worthy to be my disciple.”

Zacchaeus had much to lose if he ever became a disciple.  As a tax collector he was very wealthy because of his lawful extortion of the people that paid taxes to Rome at his tax table.  Nevertheless, when Zacchaeus heard that Jesus was in Zacchaeus home town of Jericho, Zacchaeus wanted to see and maybe hear what all the commotion was about.

Luke said that Zacchaeus was a short man and therefore could not see over the people lined up on the street to catch a glimpse of Jesus.  Not to be stopped, Zacchaeus climbed up a tree for a better view and maybe even felt invisible from the eyes of the people he had extorted.  So you can imagine how Zacchaeus may have reacted when Jesus’ eyes locked on to the man in the tree.  As kids say today, “Busted.”

More than that, Zacchaeus had to be shocked when Jesus then said, “Hurry up and climb down.  I want to come to your house for lunch.”  Polite people like Jesus don’t hang out with tax collectors like Zacchaeus.  Regarded as traitors to Judaism because of their loyalty to Rome, tax collectors were at the bottom of the social ladder.  But that didn’t stop Jesus.

It is not clear when Zacchaeus made his astounding offer to Jesus – immediately upon reaching the ground from his tree’d perch or after a little hospitality.  What’s important is that Zacchaeus was clearly moved by Jesus and what he said.  Zacchaeus said, “Look, half of my possessions, Lord, I will give to the poor, and if I have defrauded anyone of anything, I will pay back four times as much.”  Luke 19:1-10.

Zacchaeus was a metaphorical tower builder who had counted the cost and responded accordingly.  The fact that he was wealthy increased the significance of his response.  Earlier, Jesus remarked on the trap of wealth saying, “It is easier for a camel to go through a needle’s eye than for a rich man to enter the kingdom of God,” Matthew 19:23-26.

Following Jesus is a difficult proposition as Zacchaeus would tell you.  The question for us today is what might be standing in our way of being a Christ follower.

O God, it is not hard to be moved by one so committed as Zacchaeus.  So willing to part with the thing that made his life comfortable and privileged.  Please urge and prompt us at times when we may be tempted to say “no” to your invitation to follow you like you offered to Zacchaeus.  Give us strength to part with whatever keeps us from being like you.  In Jesus’ name.  Amen.