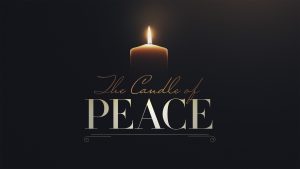 The second week of Advent begins on Sunday, December 6, and the theme of this week is Peace.  In the Bible, peace does not only mean the absence of war as in, “the Americans signed a peace treaty after WWII with the Germans.”  In defining the word, it is useful to know how both the Old and New Testaments use the word.

The principal word used to express the idea of peace in the Hebrew Bible is shalom, salam in other Semitic languages.  It means, “to be hale, whole, or complete.” In one form or another, the notions of wholeness, health, and completeness inform all the variants of the word. Peace is not, then, simply a negative, the absence of war. Peace is a positive notion, a wish that the one to whom you extend it will be well in every sense of the word.

Peace also points to the future, because it reconnects an ideal of justice that is remembered and expected. It is the task of the prophet or the herald to announce a victory, inaugurating peace.  This is to be contrasted with the false prophet who announced in Jeremiah, “peace, peace, but there is no peace” (Jer 6:6; 8:11; 8:15).  In its use here, peace is clearly associated with justice and often synonymous with justice.

The New Testament asserts, “he gave the good news of peace through Jesus Christ, who is Lord of All,” (Acts 10:36), indicating that the author of Luke-Acts saw the word “peace” as a capsule for that which the good news about Christ contains. It is not enough to say that this means peace between God and man.  It also speaks to the great human divisions of our world based on politics, race, education, status, etc.  The peace of Christ overcomes these divisions.

These are the daily devotions for this week of Peace.