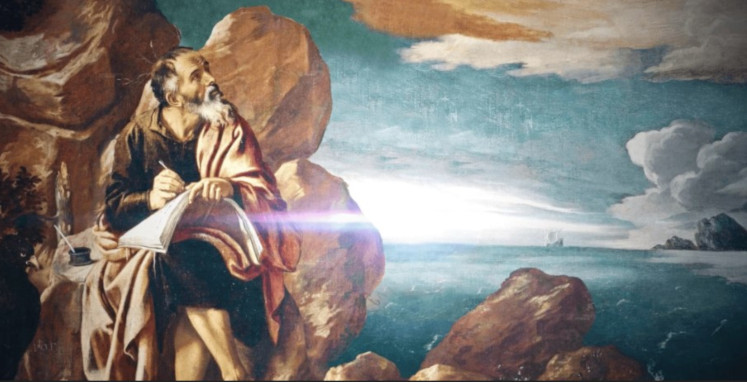 The material for this study came from two books, recommended by Peter Enns. The first is Reading Revelation Responsibly: Uncivil Worship and Witness, by Michael Gorman, Cascade Book, 2011. The second is The Message of Revelation by Michael Wilcock, InterVarsity Press, 1975.

Gorman is a broad sweep look at Revelation, giving attention to the type of literature it is, how to read it, the visions of Revelation, and the spirituality of Revelation. It is a very enjoyable and enlightening read. Wilcock is a look at the specific text of Revelation, not verse by verse, but rather through the 8 Scenes of Revelation. Neither book attempts to look at it through the sensational, codified methods of fundamentalism.

What Comes to Mind?

Question 1: What comes to mind when you think of Revelation?

Q2: What words and phrases do you often hear in association with Revelation?For some, Revelation recalls negative emotional reactions (scary, for example), and some even call it dangerous. Here are a few quotes to illustrate:

For many Christians, Revelation has been functionally de-canonized. Lectionaries tend to avoid much of Revelation to make Revelation “a more acceptable book.” Luther grouped Revelation with books that he deemed to be inferior to the Gospels and Paul. It was the only book on which Calvin did not write a commentary.

Harold Camping predicted the Second Coming of Christ on two occasions: September 6, 1994, and May 21, 2011, based on his interpretation of Revelation. A medical doctor (a distant friend of Gorman) let all his staff go in 2011 because he believed that Christ would come then, and he, the physician, would not have work for his staff to do.

David Koresh, leader of a cult of people in Waco, Texas, believed he was the incarnation of the Lamb who would lead the violent conquest against Babylon (the U.S. government). In 1994 the Waco compound was stormed by U.S. agencies, resulting in a fire that killed everyone and destroyed their compound.

These are people who are famous for their sensational takes on the end of time and the meaning of Revelation. Hal Lindsey wrote The Late, Great Planet Earth. In 1970 attempting to predict the future coming of Christ. Then Tim Lahaye wrote, “Left Behind.” 16 books began in 1995, about the Rapture. Neither book has been true.

From Wikipedia: The origin of the rapture theory is generally credited to John Nelson Darby, a 19th-century theologian. Let’s define some common terms to help one navigate the technicalities, for in reading about the rapture, you will often encounter the words postmillennialism, amillennialism and premillennialism. 1830 AD.

Q3: What would you say is the problem that causes people like Harold Camping to think that he has information on which to base the coming of Christ?

Q4: Do you recall anything that Jesus said about this sort of prediction?

Luke Timothy Johnson, NT scholar at Candler School of Theology, said that ‘few writings have been so obsessively read with such disastrous results.

Richard Hays, a NT scholar at Duke Divinity School said, “The final book of the Bible is about the conversion of our imagination. Its intent is to purge and refurbish the Christian imagination.”

Revelation or Apocalypse are Latin and Greek words that mean “unveiling.” This type of writing (apocalyptic) occurred between 200 B.C. and 100 A.D.

Apocalyptic literature is, according to Wilcock, the voice of the oppressed minority, vainly protesting its righteousness. Apocalypticists see the world in black and white and are extreme pessimists looking forward to when things would be right.

Revelation was meant to remind the oppressed minority how things really stand in the spiritual world.

Q5: How do you think our times in 2022 might resemble the times of Revelation? What do you think Jesus would say to us?

Circumstances of the Book:

Revelation was sent as a circular letter to the seven churches of Asia, directed to the real needs of 1st century people. On the one hand, to encourage these churches, and on the other hand to combat forces of evil. Probably during the reign of Caesar Domitian (AD 81-96).

Q6: Using the seven churches as a model, what sorts of things would Jesus be concerned about with us? Would they be similar? Give them names. Primary ways of interpreting the book/letter:

These writings were meant specifically for first-century readers, but they also related to us. Revelation 1:3 says, “He blesses ALL who listen to these words.”

In 1:4-8 John says he is writing to the seven churches of Asia. What John sends them is more than the short letters of chapters 2-3. The whole book is a letter. It must be noted that the letters and the Revelation are as applicable to us today as it was to them.

The message of Revelation is meant to be understandable for everyone who reads it. Why would Christ send them something that is indecipherable?

1:1-3 says that the message was to be read aloud. A futurist view of Revelation is to be discontinued. John says to his churches, “the concerns what must SOON take place.

The “Seven” churches seem to mean the church in general.

Read Revelation 1:1-20.
Q7: What did Jesus tell John was the meaning of the seven stars and seven lampstands?