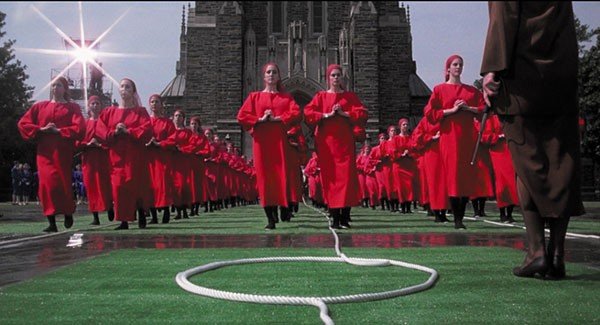 William Willimon once told a story about the filming of The Handmaid’s Tale in front of the Duke Chapel of Duke University.

The movie (1989) was filmed in 1989, and in one scene a gallows was erected in front of the chapel, from which a “handmaid” was hung to punish her “fornication” and to make a graphic point to other handmaids.

The shoot was scheduled to coincide with Duke’s spring break when fewer students would be present, but because of being late it fell right in the middle of school in full session. The push back was loud and big. Willimon said that one of his parishioners indignantly complained that an object of death should never been seen in front of a church.

Willimon commented about the irony of the complaint, given that Jesus was executed on a cross, an ancient version of the gallows and an object of death – such a cross which was attached to the wall behind the pulpit and altar of the chapel.

Not only that, we know from history that the Romans used crucifixion as an object of shame. People leaving a Roman city were apt to see some poor soul hanging from the cross-beams of a cross. Nude, helpless, writhing in pain, and vulnerable to every insult you can imagine. The Hebrews writer comments on this, writing:

“…. let us look to Jesus the pioneer and perfecter of our faith, who for the sake of the joy that was set before him endured the cross, disregarding its SHAME, and has taken his seat at the right hand of the throne of God.” Hebrews 12:2.

It’s too bad that the woman who commented on the hideousness of the gallows was not able to see that Jesus willingly took that shameful place throughout his 3 years of ministry. Though vulnerable and scorned, Jesus saw the humility of his life as being of far greater beauty and value than the woman’s pristine and polite world.

He modeled this as he went 40 days without food in the wilderness. When he submitted to the baptism of John. When he touched lepers and consorted with all the worst people around him – never being embarrassed by them and preferring their honesty. When he knelt in the upper room and washed the disciples’ feet – a task usually performed by a servant. And of course, when he endured the torments of his trial and crucifixion.

Christ of Golgotha, what you endured for us leaves us humbled and embarrassed. Humbled because of the proud and unbowed way we humans tend to live. Proud of our lives instead of ashamed. Believing that strength is the better way to achieve God’s approval. During this time of Lent, may we reflect on your cross of shame. And kneel before it. Amen.